From storage halls to archive shelves: How everything began. 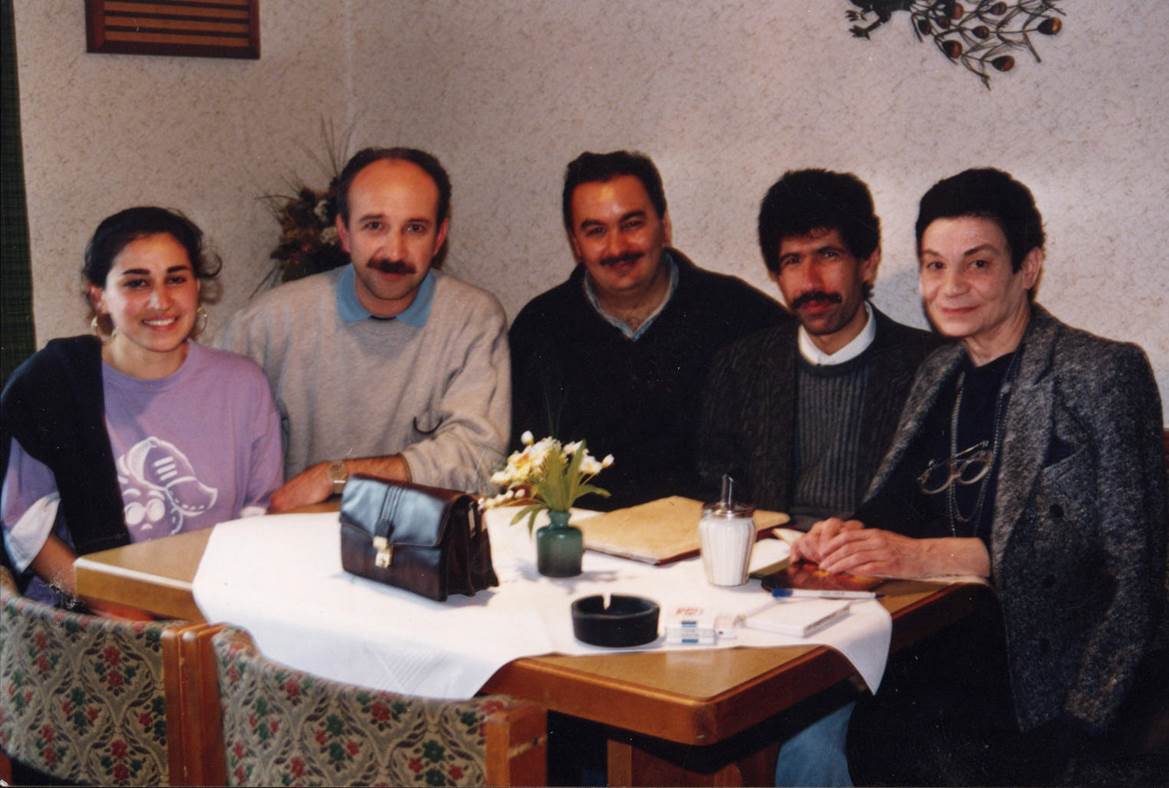 In 1990, our organization was founded and registered as a non-profit organization under the name "DOMiT—The Documentation Center and Museum of Migration from Turkey." It was founded by four immigrants from Turkey, who were motivated by a glaring deficiency: neither historians nor museums nor archives were paying attention to the history of immigrants. In order to preserve the historical legacy of those immigrants, an archive was established. In 2000 the organization moved from Essen to Cologne. Today, our archive is a one-of-a-kind assemblage, which reflects the social, cultural and everyday history of immigration to Germany. At the same time, our founders strove for the creation of a central museum of migration in Germany – a goal we continue to pursue today.

In 2007, DOMiT united with the registered association "Museum of Migration in Germany" (Migrationsmuseum in Deutschland e.V.) another group, whose members advocated a central museum for migration history. This merger brought together migrants from diverse places of origin, as well as Germans with no personal migration background. With this change, we sought a new name to better reflect the organization's composition and the collection's content, which was expanded to include all immigrant communities in Germany. Because the name DOMiT was fairly well-recognized, the members decided to change the name only slightly, to DOMiD—"Dokumentationszentrum und Museum über die Migration in Deuschland." Thus we became the "Documentation Center and Museum of Migration in Germany."

Through the exhibition "Foreign Home: A History of Immigration from Turkey" ("Fremde Heimat. Eine Geschichte der Einwanderung aus der Türkei"), DOMiD was able to reach a large audience for the first time. The groundbreaking display was shown in the Ruhrlandmuseum Essen (today called the Ruhr Museum) in 1998. Further exhibitions and internet projects on migration to Germany soon followed.

Between 2002 and 2006, DOMiD worked with several cooperative partners on "Project Migration," an endeavor supported by the German Federal Cultural Foundation. The project culminated in a large socio-historical and artistic exhibition, which was shown in four different locations in Cologne in 2005 and 2006. Through "Project Migration," we were able to add materials to our collection that represent the migration movements from Italy, Greece, Spain, Portugal, Morocco, Tunisia, former Yugoslavia, South Korea, Vietnam, Mozambique and Angola.

Our last large exhibition was displayed in the German Historical Museum in Berlin, in the historical Cologne City Hall and in the parliament of North Rhine-Westphalia in Düsseldorf in 2011. The German title "Geteilte Heimat" is a clever double entendre, which means both "divided home" and "shared home." The exhibition commemorated 50 years of migration from Turkey.

DOMiD is engaged in a number of projects. With several projects and publications, we commemorated the anniversaries of the labor recruitment agreements with Morocco and South Korea, as well as the anniversary of the "Ford Strike" in Cologne. Simultaneously, DOMiD developed its educational program, "DOMiD macht Schule." The goals of the program are to sensitize teachers and pupils to the topic of migration and to teach migration history and intercultural skills. Furthermore, in June 2014, DOMiD published a new documentation profile, which helps archivists more effectively represent the multi-facetted topic of migration. 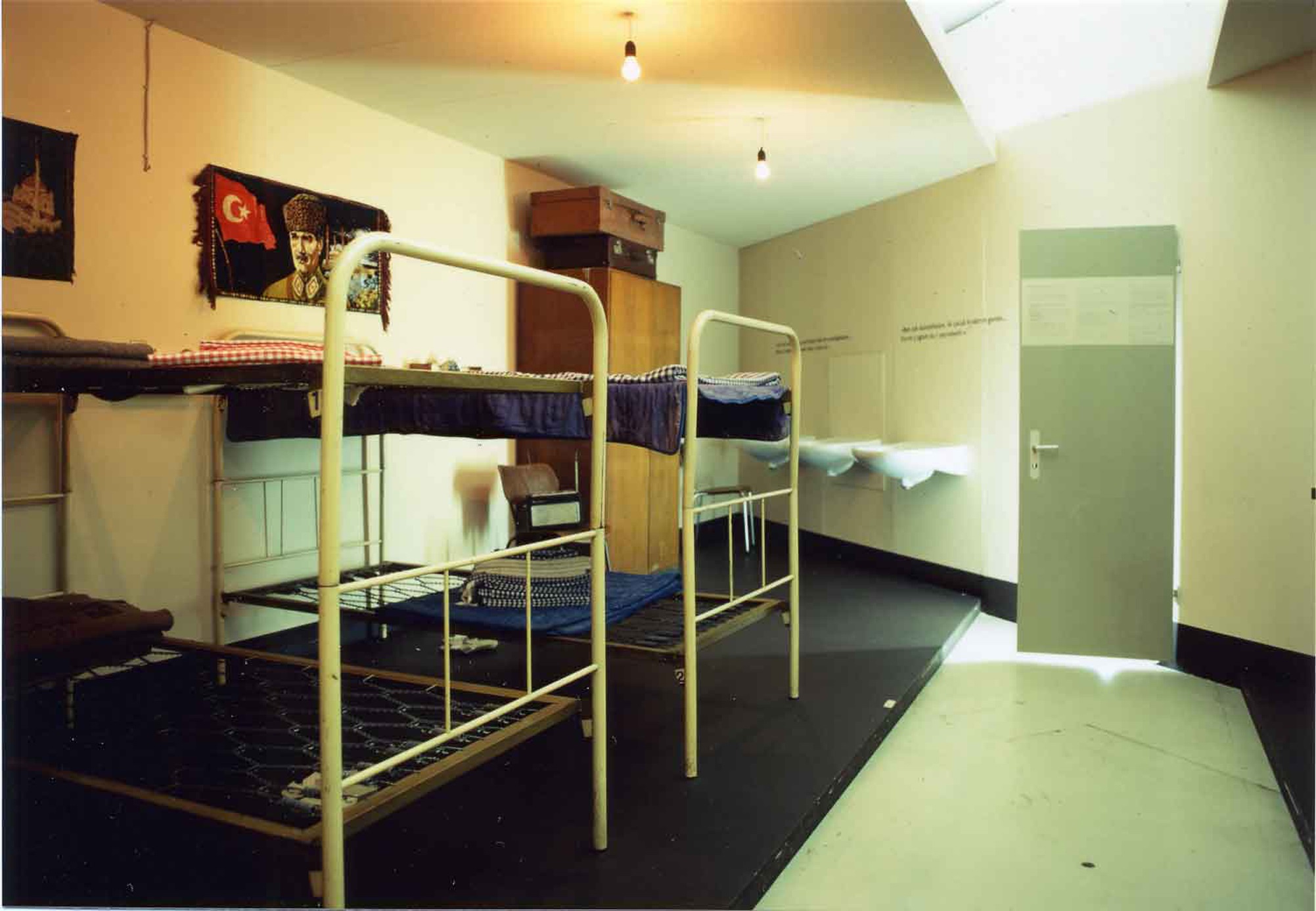 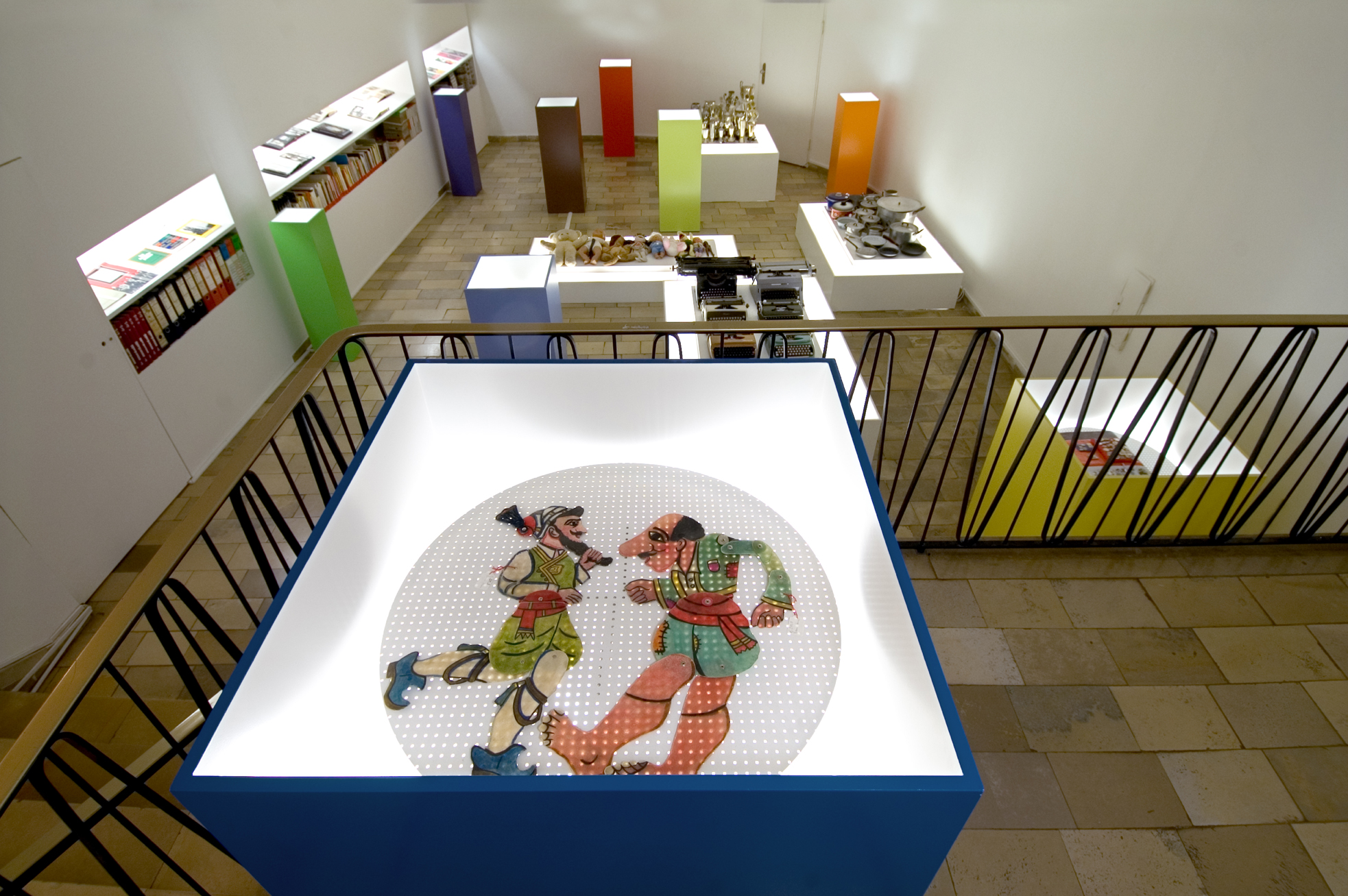 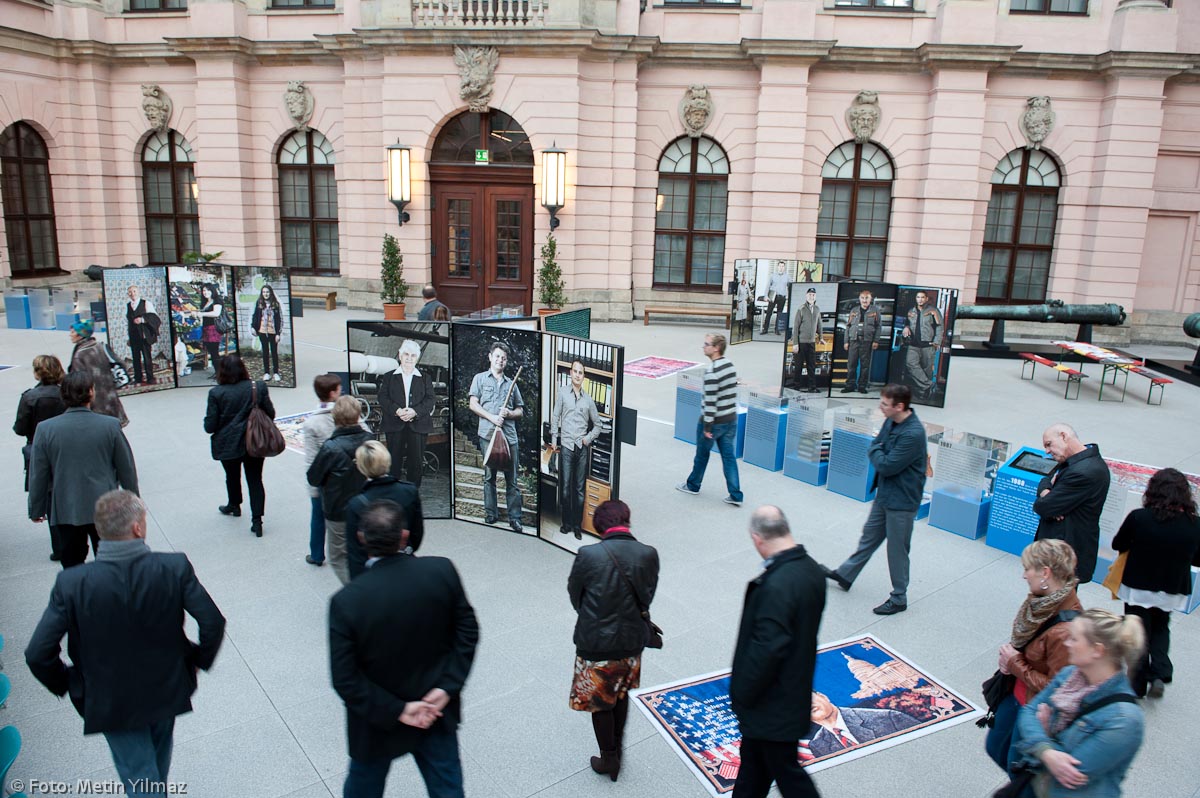 "Foreign Home" – Original Title: "Fremde Heimat – Yaban, Sılan olur" | 15.02.1998 - 02.08.1998 | Foreign Home was the first major exhibition in Germany to focus on the topic of immigration. It also marked the first instance of cooperation between a prominent German museum and a migrant organization. DOMiD and the Ruhrland Museum Essen (now called the Ruhr Museum) worked together to develop and present the exhibition. The exhibition chronicled the recruitment of labor migrants from Turkey, from the German-Turkish Labor Recruitment Agreement (Anwerbeabkommen) of 1961 to the recruitment ban (Anwerbestopp) of 1973. In addition to the recruitment, "Foreign Home" recounted the settlement process of the so-called "first generation," through the beginning of the 1980s. It included both Turkish and German perspectives. The exhibition focused on the early phases of migration in particular and outlined the roots of the debate about migration in West Germany at that time. "Foreign Home" illustrated the world in which Turkish migrants worked and lived. Among the exhibition pieces were original furnishings from the laborer dormitories, documents, personal keepsakes and photographs from around 100 lenders, most of whom were private persons. Tours, offered in German, Turkish and sign language, provided more insight into the numerous exhibits. The exhibition was accompanied by an extensive program of events, which included cultural and athletic performances and various discussion rounds. "Foreign Home" enjoyed the interest of a lively public. A bilingual catalog and a bilingual overview were published to go along with the exhibition. Unfortunately, the catalog is currently out of stock (Picture: DOMiD-Archive-Köln).

40 years: Foreign Home. Immigration from Turkey to Cologne | 27.10.2001 - 23.11.2001 | Cologne | To mark the 40th anniversary of the German-Turkish labor recruitment agreement (deutsch-türkisches Anwerbeabkommen) in 2001, DOMiD developed an exhibition on the history of Turkish immigration to Cologne. It was presented in Cologne's historic City Hall in two languages, German and Turkish. This project evolved from an earlier exhibition, "Foreign Home. A Story of Immigration from Turkey," which DOMiD showed in the Ruhrlandmuseum in Essen in 1998. The exhibition relates stories of immigration from the perspectives of the so-called "guest workers," their neighbors, their friends and their colleagues. It covers a span of thirty years, from 1961 to 1991. The collection focuses on the early phases of migration in particular: the recruitment of laborers from Turkey, life in the dormitories, work in the factories, recreational activities, coexistence and contact with German neighbors, and the first generation's process of settlement and establishment in Germany. In total, 400 different exhibits were displayed. These included personal keepsakes, objects of everyday use, documents, photographs, letters and newspaper articles. Tours were offered in German and in Turkish and were given most often to school groups. The exhibition was met with great interest from visitors, engaging both those with a personal "migration background" and those without. (Foto: Dietrich Hackenberg/DOMiD-Archive, Cologne).

Project Migration 30.09.2005 - 15.01.2006 | Cologne | DOMiD developed the project in cooperation with the Cologne Art Association, the Institute for Cultural Anthropology and European Ethnology at the University of Frankfurt am Main, as well as the Institute for Critical Theory at the Zurich University of the Arts. It was sponsored by the German Federal Cultural Foundation. The project comprised a variety of research projects, art works, events and film programs. The assorted activities focused on the history of labor migration since the 1950s and the accompanying social changes. An exhibition was among the events and activities of Project Migration. It was shown in four central locations in Cologne from fall 2005 through the beginning of 2006. It marked the 50th anniversary of the German-Italian Recruitment Agreement (deutsch-italienisches Anwerbevertrag). That agreement, signed December 20, 1955, signifies formal beginning of migration to Germany from the lands of the Mediterranean and Portugal. The exhibition addressed the impact of migration on society and illustrated how migration had shaped Germany and Europe. Furthermore, through its examination of the past and present, the exhibition questioned the future potential of migration (Picture: Dietrich Hackenberg/DOMiD-Archive, Cologne).

The exhibition "Divided Home / Shared Home. 50 Years of Migration from Turkey" was another milestone in DOMiD's history. It was shown in three German cities. The exhibition marked the 50th anniversary of the German-Turkish labor recruitment agreement (deutsch-türkisches Anwerbeabkommen) in 2011. DOMiD designed the exhibition, which examined the history of immigration from Turkey to Germany through different perspectives. "Divided Home / Shared Home" was shown in Berlin, Düsseldorf and Cologne in late 2011. In Berlin, the exhibition was displayed in the German Historical Museum's special exhibition space, the adapted courtyard of that historic building (Schlüterhof des Zeughauses). Thus, migration history was shown in the center of German memory culture. The next step would be the inclusion of migration history into the permanent collection. The first part of the exhibition was comprised of life-sized photo portraits. The portraits depict three generation of immigrant families in Germany: the "guest workers" who emigrated from Turkey, their children and their grandchildren (Portraits of 3 Generations). In the second part of the exhibition, 50 migration stories were recounted through photos, objects and documents from private lenders. Through those individual stories, the exhibition illustrated successes, as well as challenges (Picture: Metin Yilmaz/DOMiD-Archive, Cologne)

Motiv Migration - Kölner Geschichte(n) | 16.03.2019 - 12.04.2019 | Kulturbunker Cologne-Mülheim | DOMiD conducted "Projekt Migration" in cooperation with the Kölnischer Kunstverein, the Institute for Cultural Anthropology and European Ethnology at the Goethe University, Frankfurt am Main, and the "Institut für Theorie der Gestaltung und Kunst an der Hochschule für Gestaltung und Kunst" in Zürich. The project was sponsored by the German Federal Cultural Foundation. The project covered a variety of research projects, art campaigns, events, and film programmes. At the centre of all this work was the history of labour migration since the 1950s, as well as the societal changes brought about by these migration movements. One of the many events and campaigns was an exhibition, which could be found between the autumn of 2005 and early 2006 at four different places in central Cologne. The exhibition marked the 50th anniversary of the signing of the German-Italian labour recruitment agreement on 20 December 2005. This was the formal beginning of migration between various Mediterranean countries, as well as Portugal, and Germany. The exhibition focused on the societal changes effected by migration. It thus presented a Germany and Europe shaped by migration. Beyond that, from a consideration of history and the present situation, it mapped out the question of the future potential of migration. A multilingual catalogue published by DuMont Verlag complemented the exhibition. It contained photographic and artistic images, documents, and interviews, as well as essays contributed by international scholars. For its extraordinary design, concept, and workmanship, the catalogue was awarded a prize by the Stiftung Buchkunst in 2005. (Picture: DOMiD-Archive, Cologne).