A special contemporary testimony to the history of the Federal Republic of Germany has found its way into the collection of the Documentation Center and Museum on Migration in Germany (DOMiD). The "Möllner Briefe" provide insight into a civil society that was horrified by the racist arson attacks in the early 1990s and sympathized with the suffering of those affected. Through indexing, archiving and complete digitization at DOMiD, these will be made accessible to research in the future while preserving personal rights.

When the Yılmaz and Arslan families mourned their murdered family members in 1992, the then German Chancellor Helmut Kohl did not take part in the mourning ceremonies so as "not to lapse into condolence tourism," as a government spokesman put it at the time. Others expressed their sympathy and took a stand against the increasing racist violence in the newly reunified Germany.

Solidarity in the form of letters

After the attacks, the city of Mölln called for people to express their sympathy to the family. Hundreds of private individuals, including children and young people, but also institutions, schools and associations, as well as public figures and representatives from politics and business, wrote to the families, expressing their grief and horror. Even concrete offers of help were made. Only: these letters probably did not reach large parts of the two families. It was not until 2019 that İbrahim Arslan, one of the nine injured and survivors of the arson attack, became aware of the letters, which were stored in the Mölln city archives, and demanded that they be handed over to the family. The city complied with the request.

To this day, it has not been possible to reconstruct why the letters were not known to the families, according to their statements, although they were kept in the city archive and were also used there as part of educational programs. Today, Arslan says, "If we had known about the sympathy and solidarity in society at the time, it would have helped us then and given us a little comfort." For decades, the families have been advocating a dignified remembrance in which those affected are at the center.

We use the term they also use for the collection of material given to us by the families: the "Möllner letters." The bundle consists of 467 letters, postcards, mourning cards and drawings. DOMiD added the letter bundle to the collection at the beginning of 2021 and digitized it completely. Researchers can conduct research in the archive premises in Cologne-Ehrenfeld by appointment.

The Arslan family has long been a lender to DOMiD's collection of photographs and documents. Both families found it easy to decide that the letters should be kept at DOMiD, says İbrahim Arslan: "DOMiD is the place where migration history is told, processed and studied. For our family, it was clear that the letters should also be kept there, where not only the white dominant society tells its story, but where the stories of our families are also told." Bengü Kocatürk-Schuster, Collection Expansion Officer at DOMiD: "The letters are valuable testimonies of recent contemporary history. For us, it is an important sign of trust in DOMiD that the families know their stories, as well as their emotionally charged archival materials, are in good hands with us." Both DOMiD and the families are open to educational collaborations with the material. 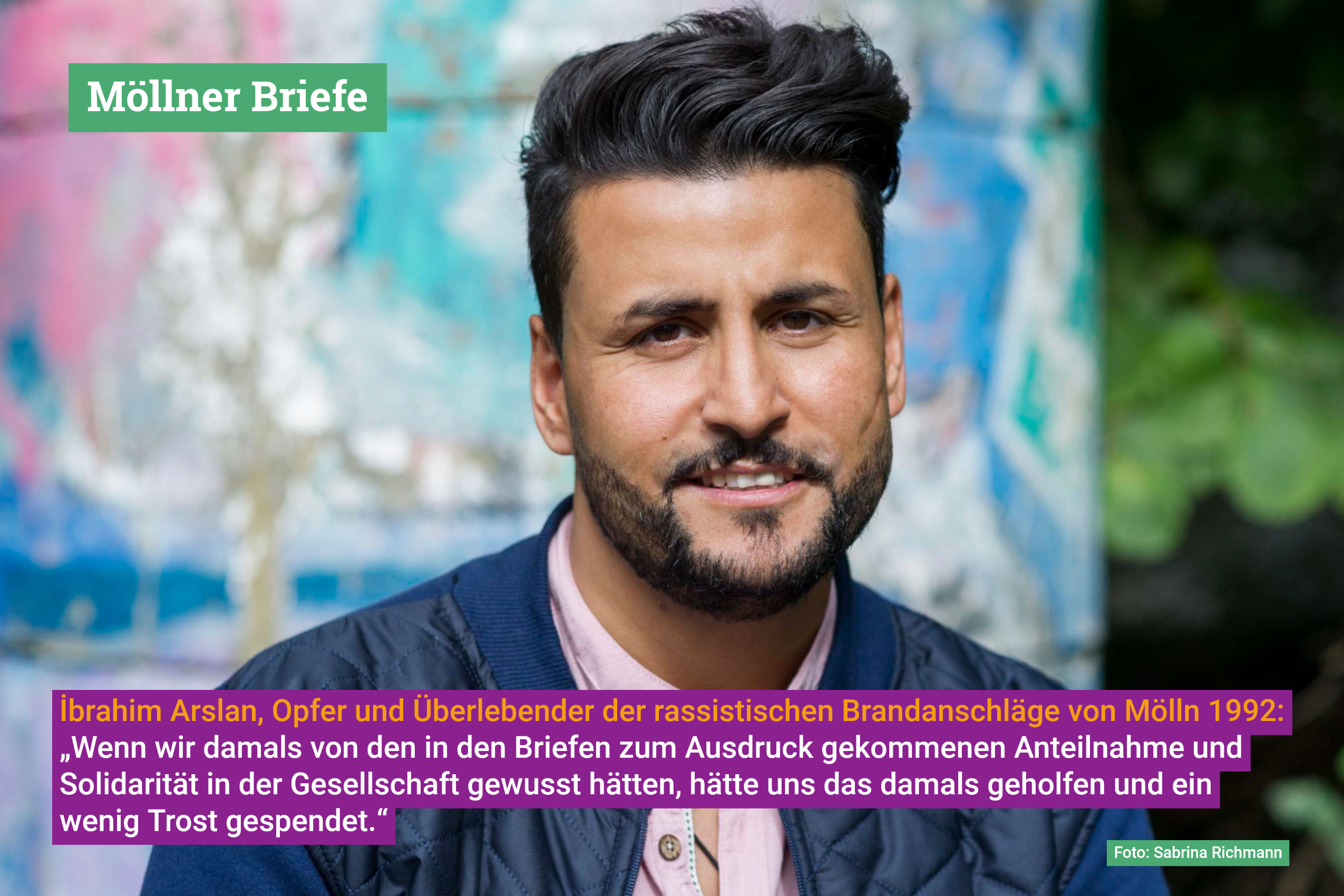 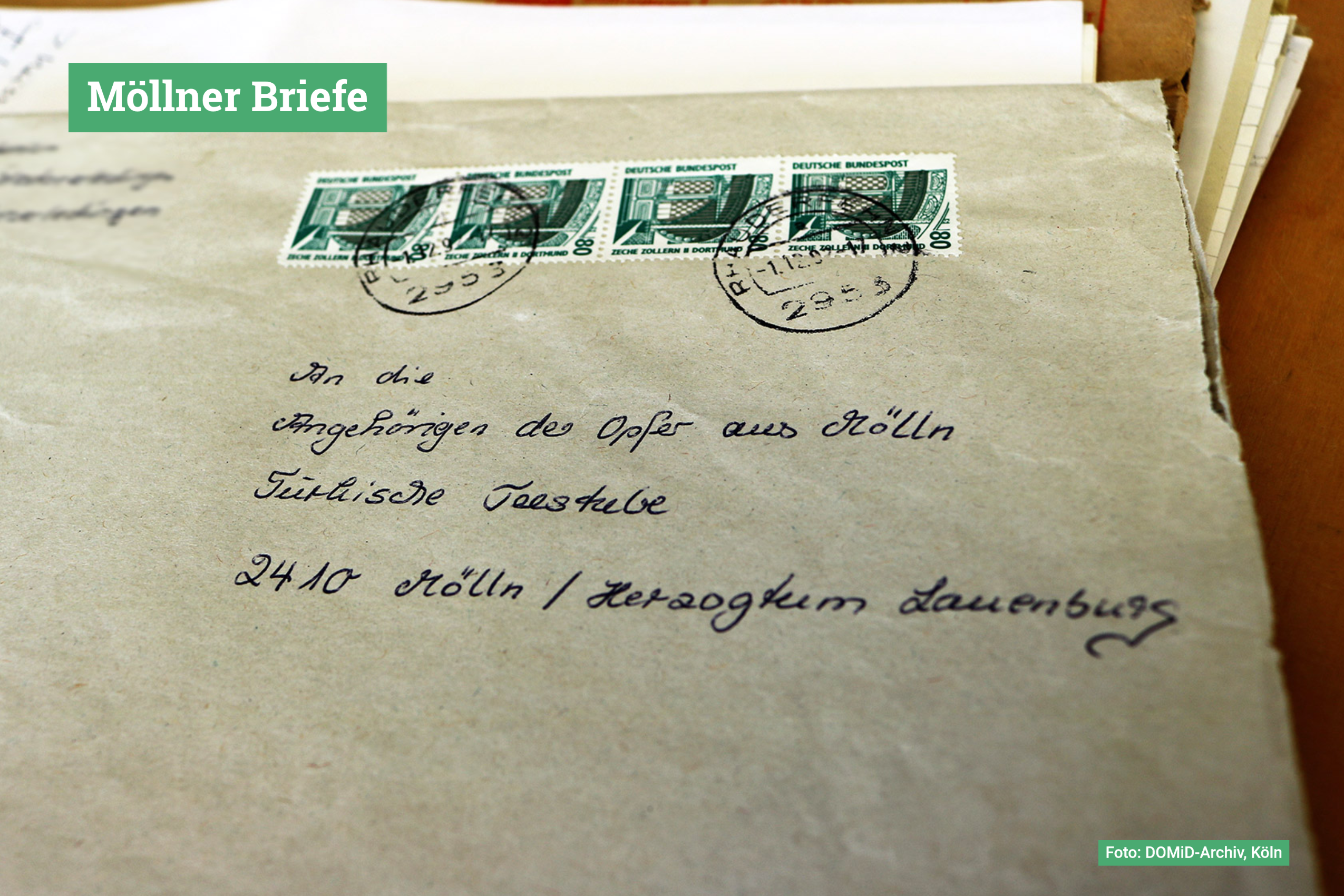 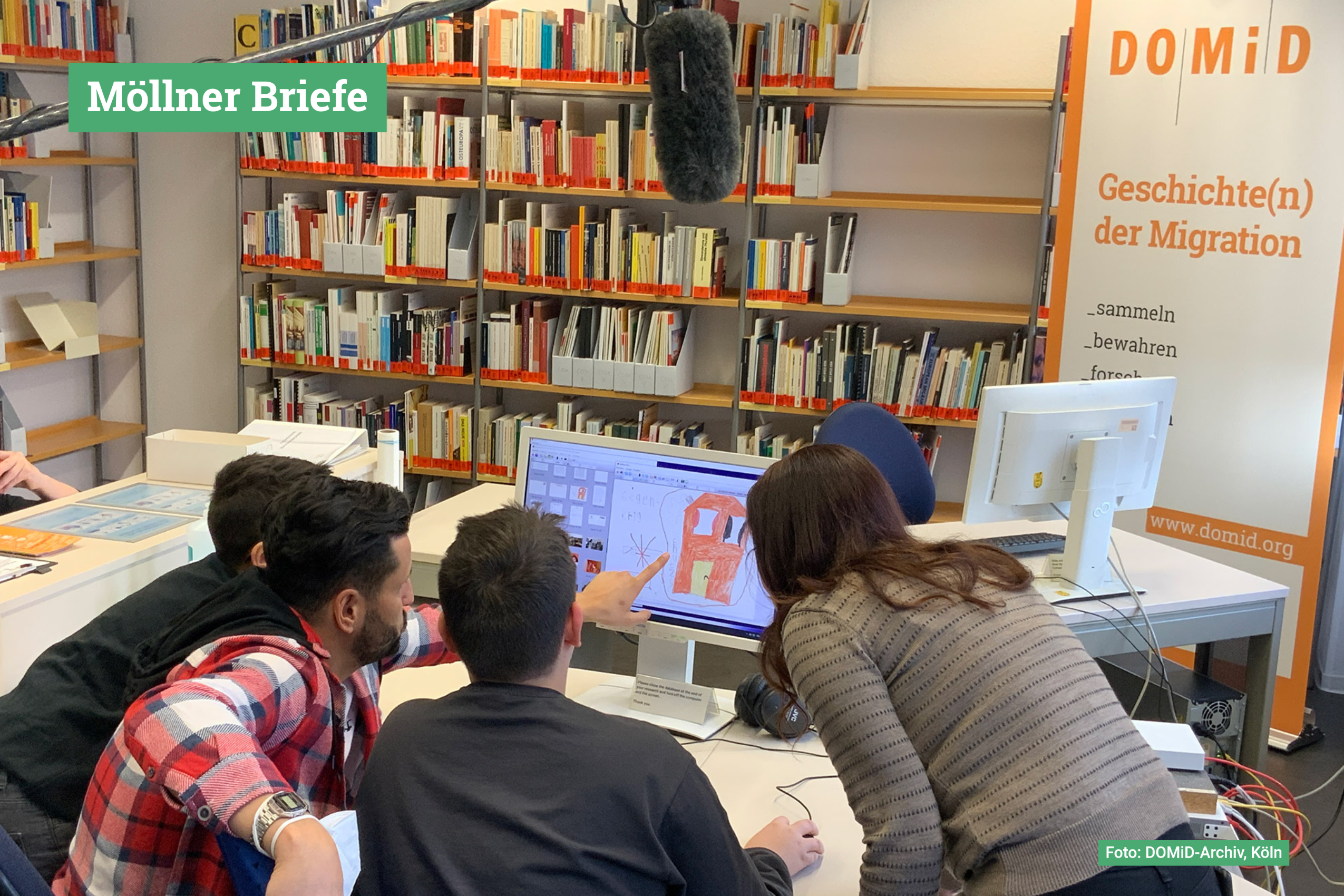 İbrahim Arslan, victim and survivor of the racist arson attacks in Mölln in 1992: "If we had known at the time about the sympathy and solidarity expressed in the letters in society, it would have helped us at the time and given us a little comfort." Photo: Sabrina Richmann

The racist arson attacks in Mölln on November 23, 1992, killed Yeliz Arslan (10), Ayşe Yılmaz (13), and Bahide Arslan (51). In the days that followed, hundreds of people wrote to the affected families. Only: these letters did not reach most of them until almost 30 years later. We are archiving these letters and, at the families' request, are making them available for research as of today.

We use for the collection of material given to us by the families the term they also use: the "Möllner Briefe". The collection consists of 467 letters, postcards, mourning cards and drawings. They are letters that express sympathy, horror, shame, grief and solidarity. Some make concrete offers of help. Even children and entire school classes sent letters.

Most letters were sent from the Federal Republic. Occasionally, letters were written from Turkey, the Netherlands, Belgium, Denmark, Greece, the USA and Austria. Individual letters are written in Greek, Spanish and Arabic. All letters were recorded and digitized by us. Upon appointment, these letters are available for research in our archive in Cologne.

İbrahim Arslan tells his sons here about the letters and the history of his family. The families concerned would like educational materials to be produced using the Mölln letters. For decades, they have been campaigning against racism and for dignified remembrance that focuses on those affected.

All articles German only