Again and again, people from other countries arrive in Germany. Others seek their fortune far away, emigrate. And they have been doing so for centuries. Germany is a country of immigration, a migration society, a post-migrant society. The children of immigrants are born here and yet are still confronted with the question: "Where do you (actually) come from? However, being made a stranger and questions of belonging are often different between generations. At the same time, there are moments of arrival that are universal. A new school, a new job - how do we feel when we "arrive" and what does that do to "us"? How can arrivals succeed?

Occasion: 60th anniversary of the recruitment agreement with Turkey

The migration museums DOMiD and Deutsches Auswandererhaus Bremerhaven have taken the 60th anniversary of the German-Turkish recruitment agreement as an occasion to invite to this intergenerational discussion. The aim is to strengthen social cohesion by conveying the history of migration. We facilitate the conversation between the generations. Young people in Bremerhaven will deal with the topic in a vacation workshop and ask contemporary witnesses in Cologne about their experiences of arriving, staying and their questions about identity in the concluding discussion on Friday. The young people will in turn report on their experiences with labels such as "migration background". This is the beginning of a search for what it takes for participation and social cohesion to succeed.

Mitat Özdemir came to Cologne in 1966 as a Ford worker and later worked as a social worker and engineer. In 1983, he started his own business on Cologne's Keupstraße and chaired the Keupstraße trade union for many years. For many years, he has been committed to clarifying the NSU complex and to an open society.

Rosa Spitaleri came to Cologne from Sicily at the end of the 1960s as an eight-year-old. Her parents had gone ahead in 1964, leaving Rosa and her brother Vincenzo behind with relatives. Eventually, they planned to stay in Germany for only a few years, earn money, and then return to Sicily. But they stayed, and Rosa and Vincenzo completed their studies in Germany. Today she works as a social worker for Caritas, enjoys reading and writing poetry.

Kutlu Yurtseven was born in Cologne; his parents came to Germany as "guest workers" in the 1960s. Since the 1990s he has been a rapper with the Cologne group Microphone Mafia, but also: teacher, social worker, amateur actor at the Schauspiel Köln. He is also a memory worker: he completed hundreds of concerts with Auschwitz survivor and singer Esther Bejerano (died in 2021). Kutlu is involved in the tribunal "NSU-Komplex auflösen" and in the initiative Herkesin Meydanı - Platz für Alle, which is campaigning for an anti-racist memorial on Keupstraße in Cologne to commemorate the NSU attacks in Cologne.

A cooperation event of DOMiD and Deutsches Auswandererhaus on the occasion of the 60th anniversary of the German-Turkish recruitment agreement.

The event was recorded. The recording can be found at the bottom of the page. By participating in the stream, you agree to the recording, storage and possible publication.

Impressions of the event 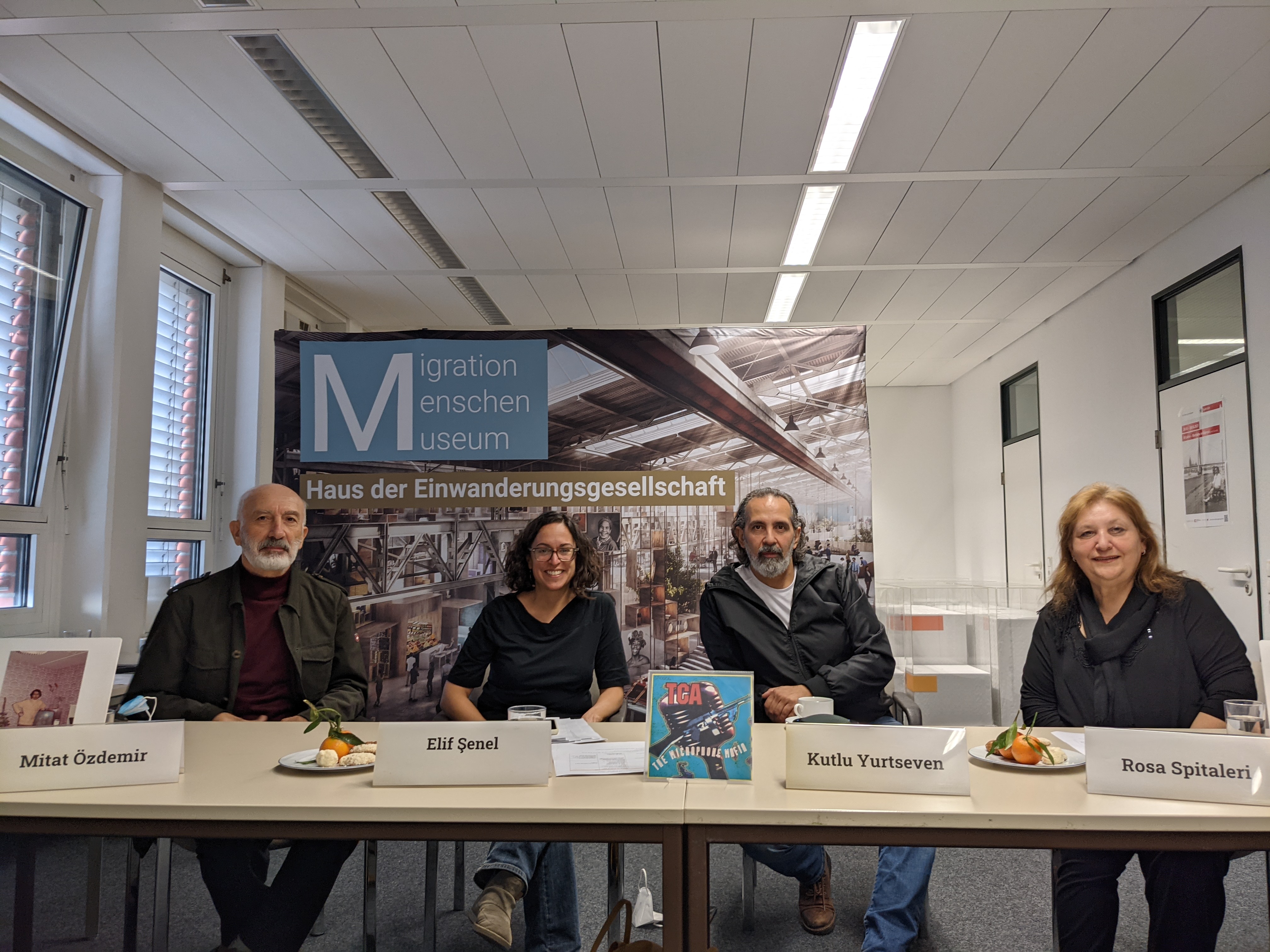 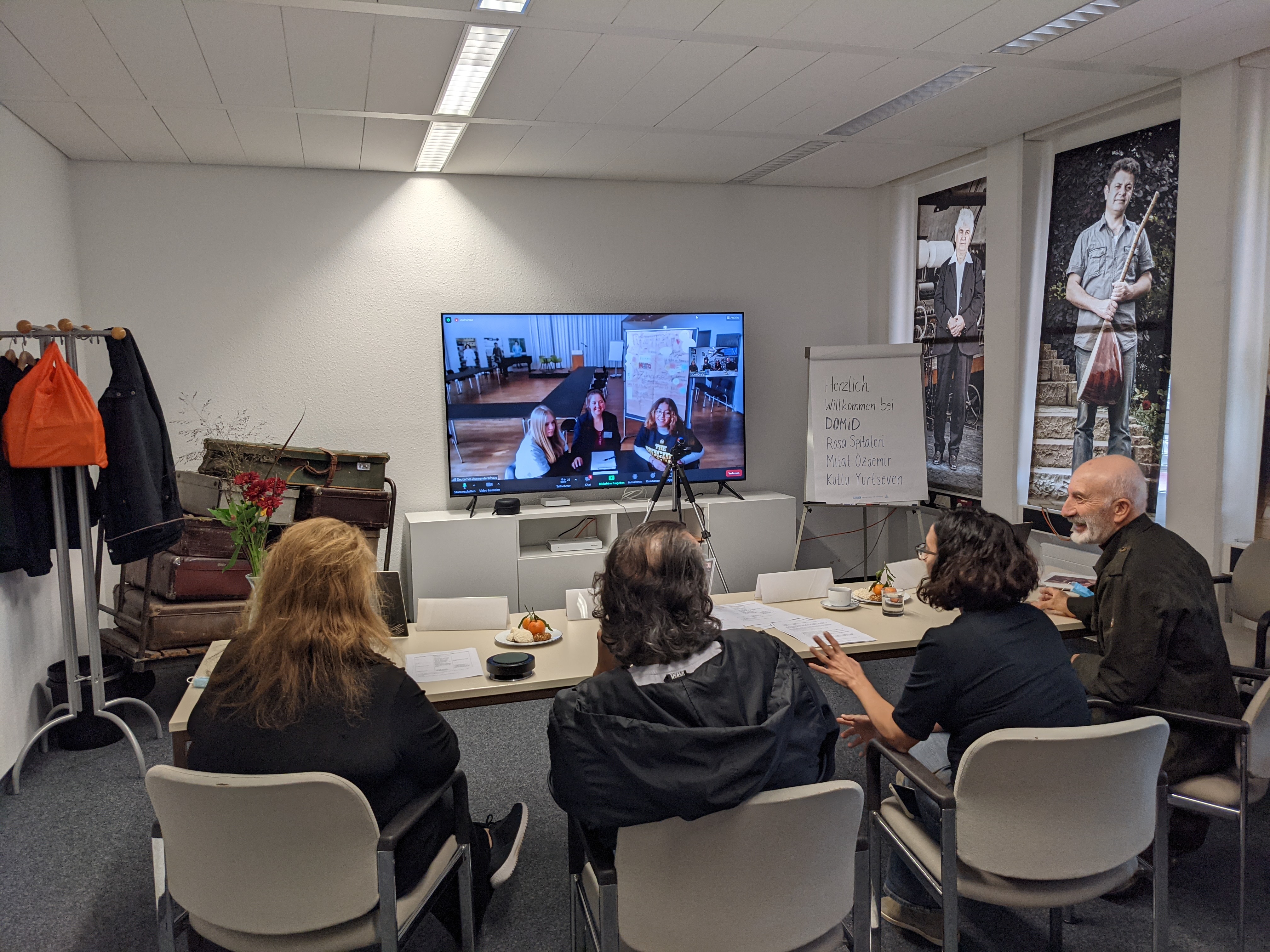 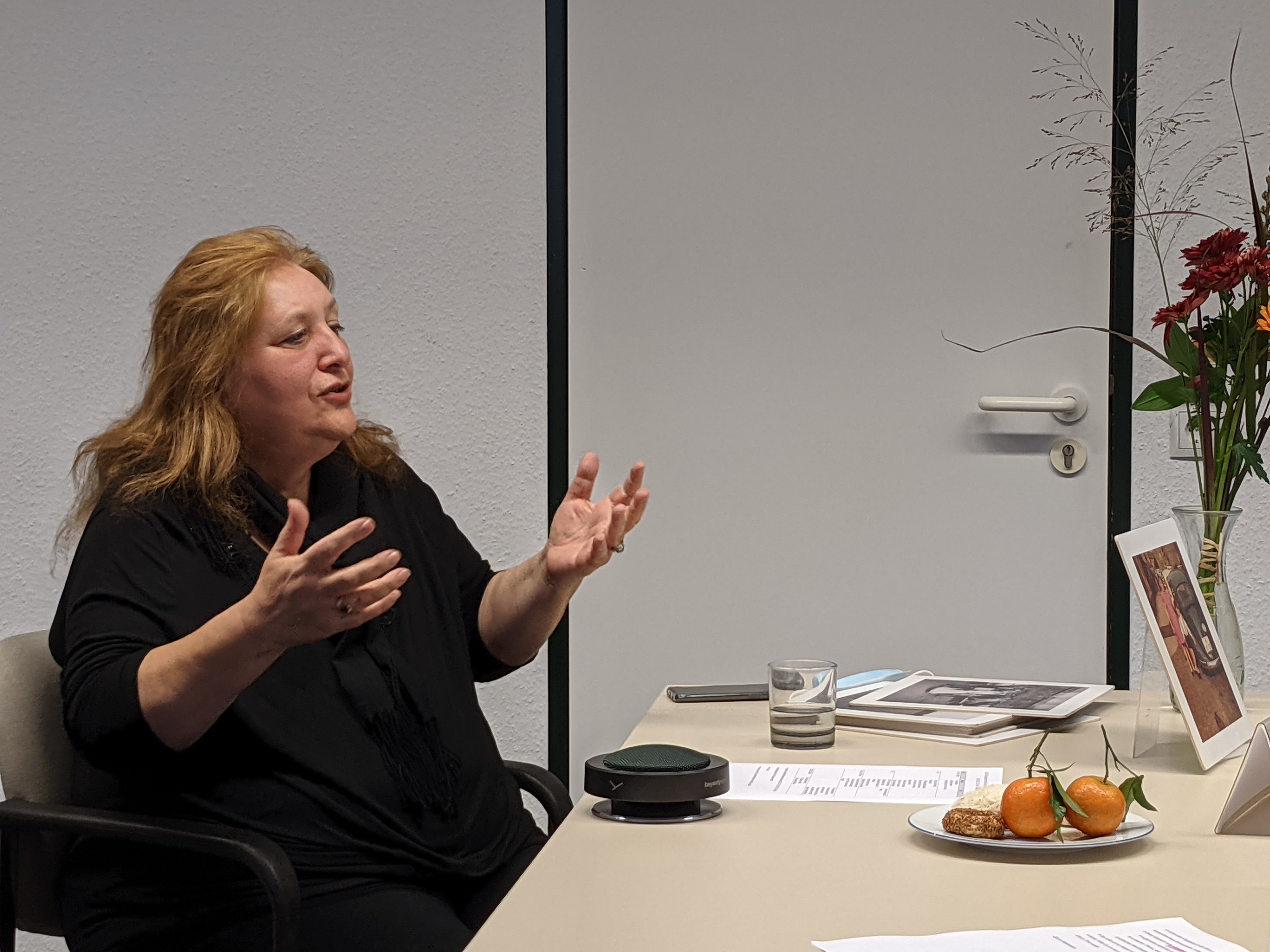 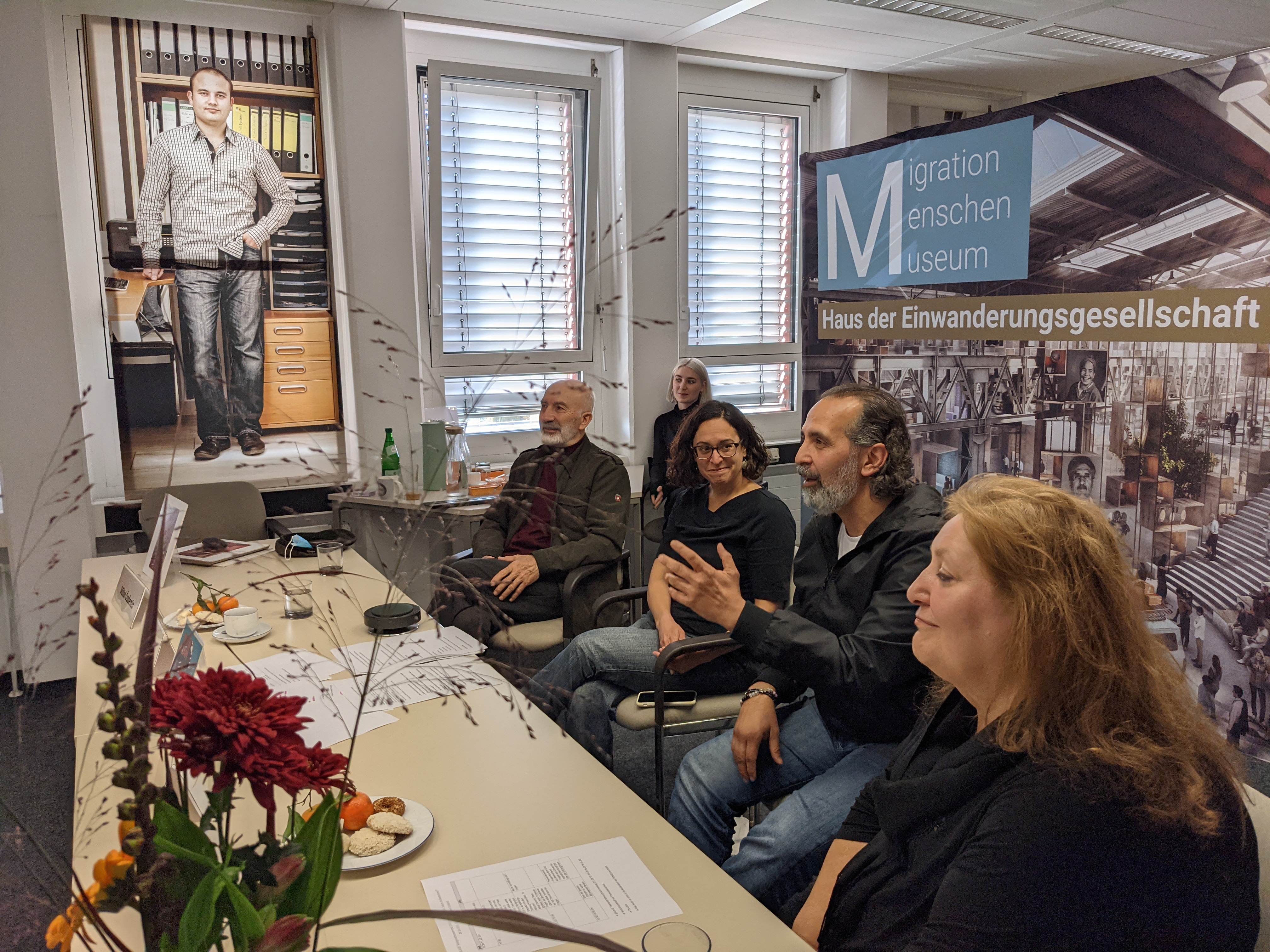 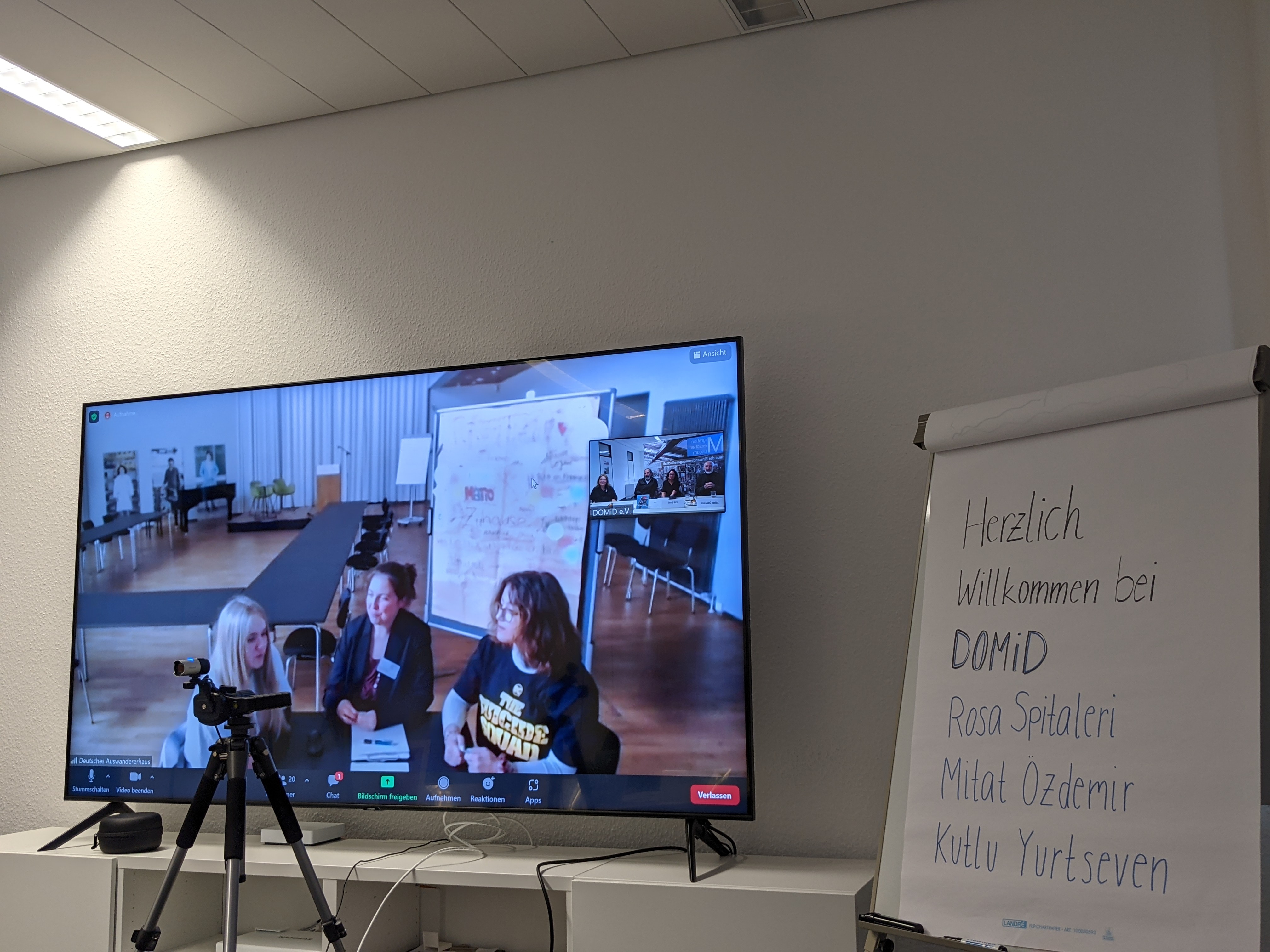 We were pleased to welcome the three contemporary witnesses Rosa Spitaleri, Kutlu Yurtseven and Mitat Özdemir and our moderator and journalist Elif Şenel to DOMiD. Photo: DOMiD Archive, Cologne

The two students Fatima and Lily were connected from the German Emigration Centre in Bremerhaven and had the opportunity to ask the three witnesses questions on behalf of their workshop group. Photo: DOMiD Archive, Cologne

Recording of the conversation