Labor migration is not a male phenomenon. In 1973, for example, women comprised around 30 % of all foreign employees on the German labor market. Many women came to Germany to financially support their families. Another reason was the possibility to redefine their traditional (female) role in a new environment. In addition, women were looking for adventures and new experiences.

Transformation of the labor market and the role of women

Female migrant workers were already part of Germany’s labor market in the 1950s – this made them pioneers in the coordination of work, family and the household. In the 1950s and 60s, the Federal Republic of Germany was still dominated by patriarchal ideas which did not see women outside their traditional mother-/housekeeper role favorably. The beginning of the 1970s was a turning point as women increasingly gained access to the labor market, partly due to the female emancipation movement, but also because of a growing demand in labor that could no longer be met by the male population only. 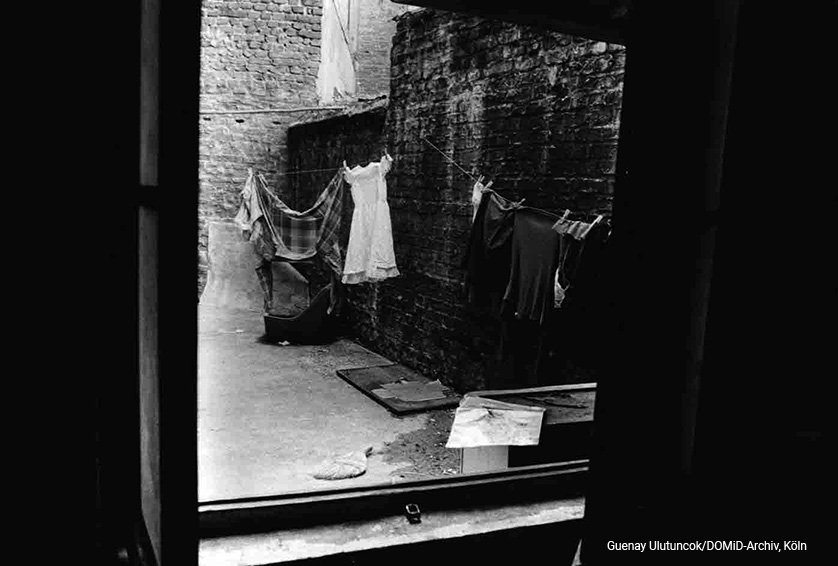 View of a back yard with clotheslines. From a series on Weidengasse and Eigelstein in Cologne. Photo: Guenay Ulutuncok / DOMiD Archive, Cologne 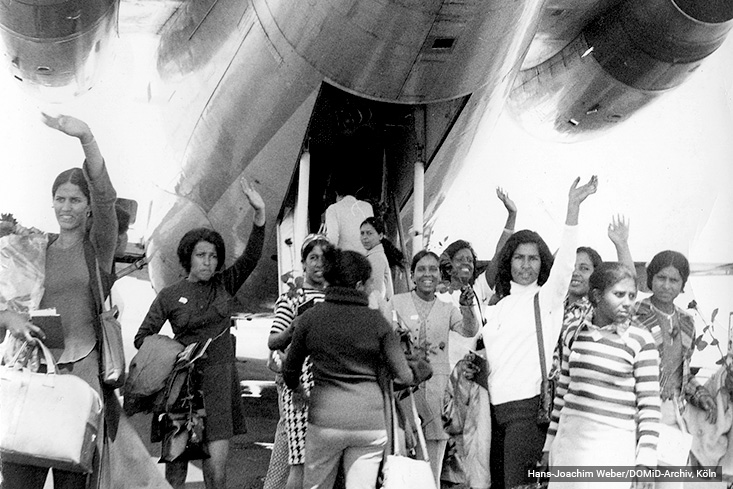 Moroccan migrant workers are waving goodbye at the airport in Casablanca before their departure to Germany. Casablanca, 1971. Photo: Hans-Joachim Weber/DOMiD-Archive, Cologne

In both East and West-Germany, many female migrants worked in the industrial sector. They were specifically recruited for low-wage jobs, for example precision mechanical work in the field of electrical engineering. Since the 1950s, another crucial sector of female labor migration was nursing- and healthcare. Similiarly to today, this sector was understaffed - in order to keep the German health sector running, people from other countries were recruited.

Between the late 1950s and the late 1970s, 11.000 Korean nurses came to the Federal Republic of Germany, along with women from the Philippines and India recruited for the same sector. Contemporary media reported very favorably about the Korean healthworkers, but their portrayal was also characterized by racist stereotypes and exoticism. In their daily work life, Korean women also had to face prejudices and discrimination.

Unlike in Korea, there was no differenciation between auxiliary nurses and the higher-educated nurses in Germany. The Korean nurses thus stood out as the better qualified colleagues and were especially popular with patients and doctors. However, the Korean nurses were now confronted with tasks that had never been part of their work in their home country, like cleaning patients, which caused frustration. The higher qualification of Korean nurses also sparked jealousy and competitiveness among their German colleagues – which often led to the exclusion of the Korean nurses on the job.

Almost 30% of all Korean women who came to Germany as nurses stayed here. Of the remaining 70%, 30% went to North America to seek better job opportunities. The rest went back to South Korea. Some of the returnees co-founded and subsequently settled in a so-called „German Village“ on the island of Namhaedo. 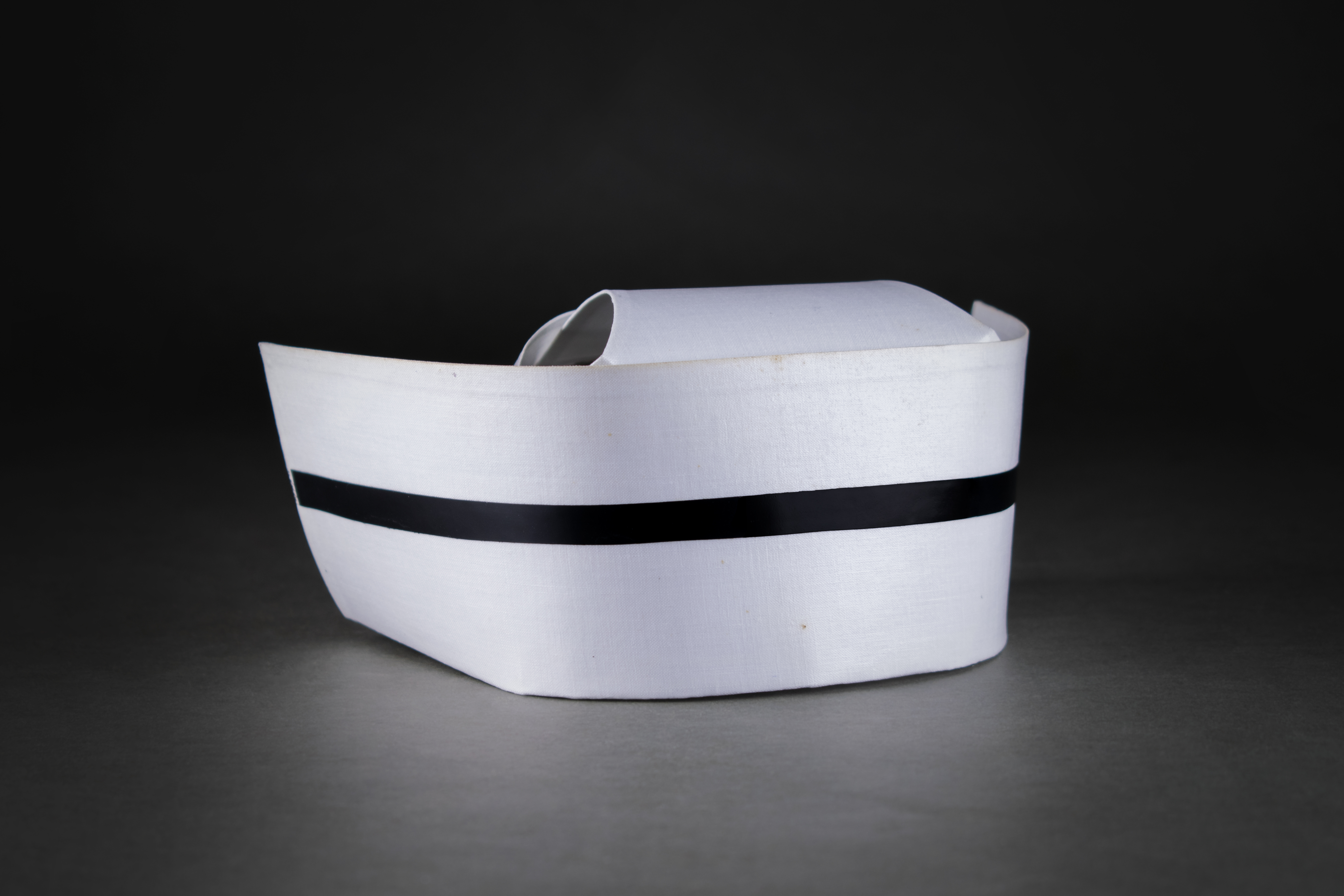 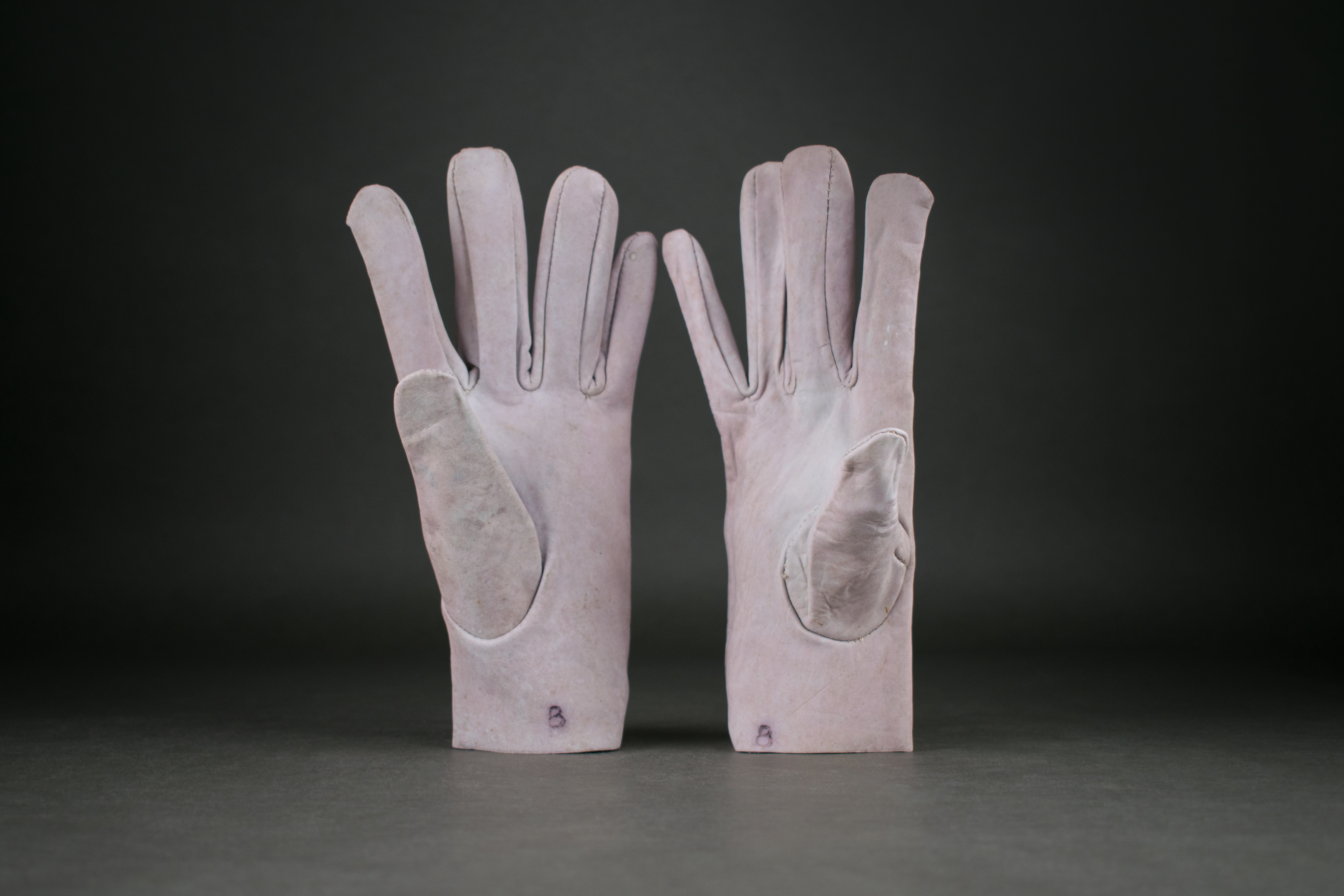 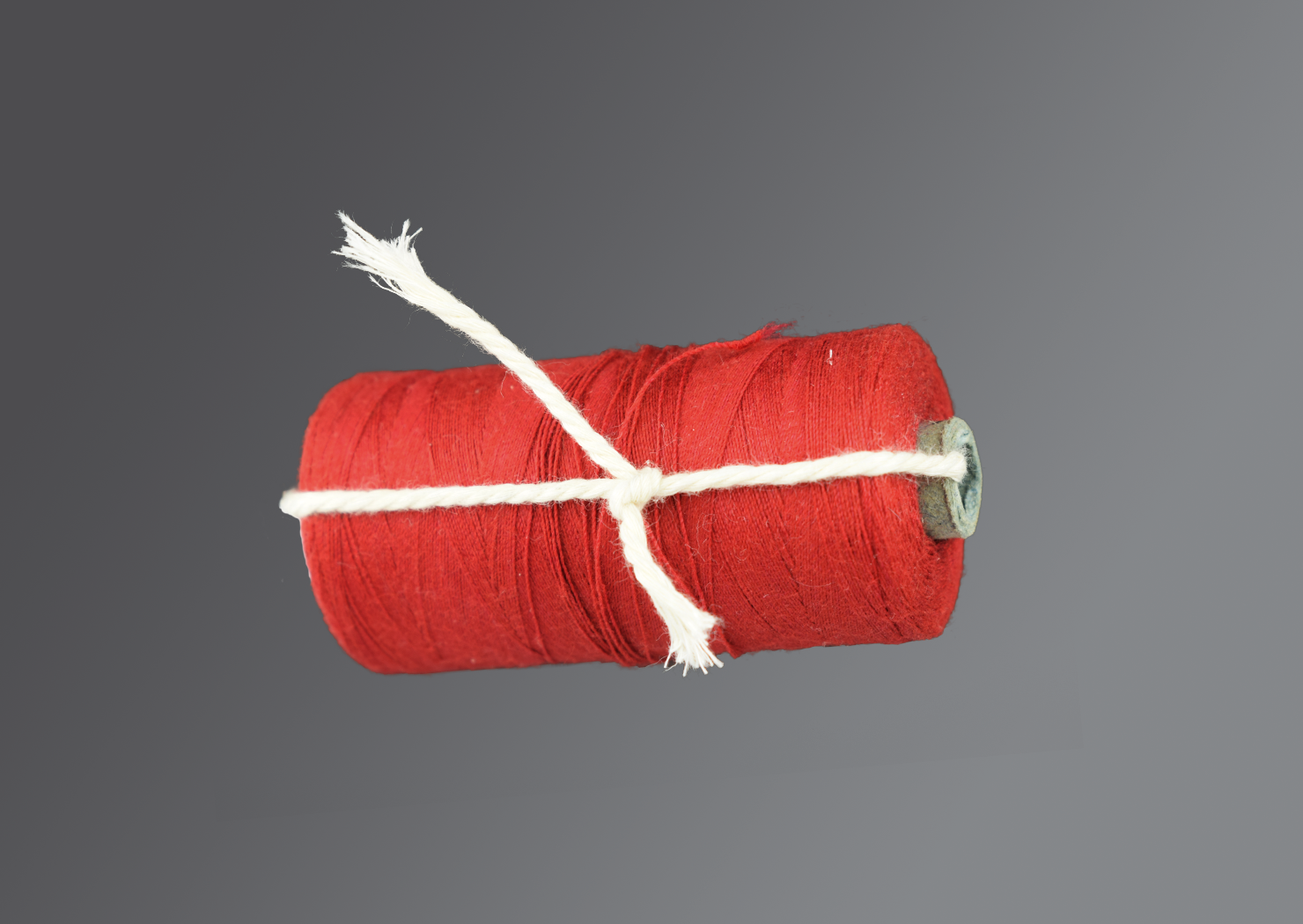 Gloves from Eva V. from Thessaloniki, late 1960s. Women workers were in demand in the industrial sector. Eva V. used these gloves for her task of checking pistons at the automotive supplier Mahle in Cannstatt. As a single mother, Eva took care of two daughters. DOMiD-Archiv, Cologne, E 0551,0024

Yarn from Thị Vân Anh Đ. from Vietnam, former "contract worker" in the GDR, late 1980s. This yarn is from a textile factory in Oschersleben (Saxony-Anhalt). Thị Vân Anh Đ. from Vietnam was employed there as a contract worker in the German Democratic Republic (GDR). She worked in the factory since 1987 as a seamstress. Officially, labor migrants from „socialist brother states“ were supposed to learn new skills in the GDR and pass them on in their home country. But in fact, these „contract workers“ (sometimes also coming from Cuba, Algeria, Angola and Mozambique) were often used for unskilled and low-paid jobs. Many women were employed in the textile industry and had to face harsh working conditions there. DOMiD-Archive, Cologne, E 0343,0005

Typewriter of pediatrician and radiologist Sukil Lee, 1960s. Radioligist and pediatrician and radiologist Dr. Sukil Lee initiated the recruitment of South-Korean nurses to Germany. He was working at the University-Clinic of Mainz. On this typewriter, Dr.Lee wrote the entire correspondence for the recruitment of Korean nurses during the 1960s. DOMiD-Archive, Cologne, E 1359,0046 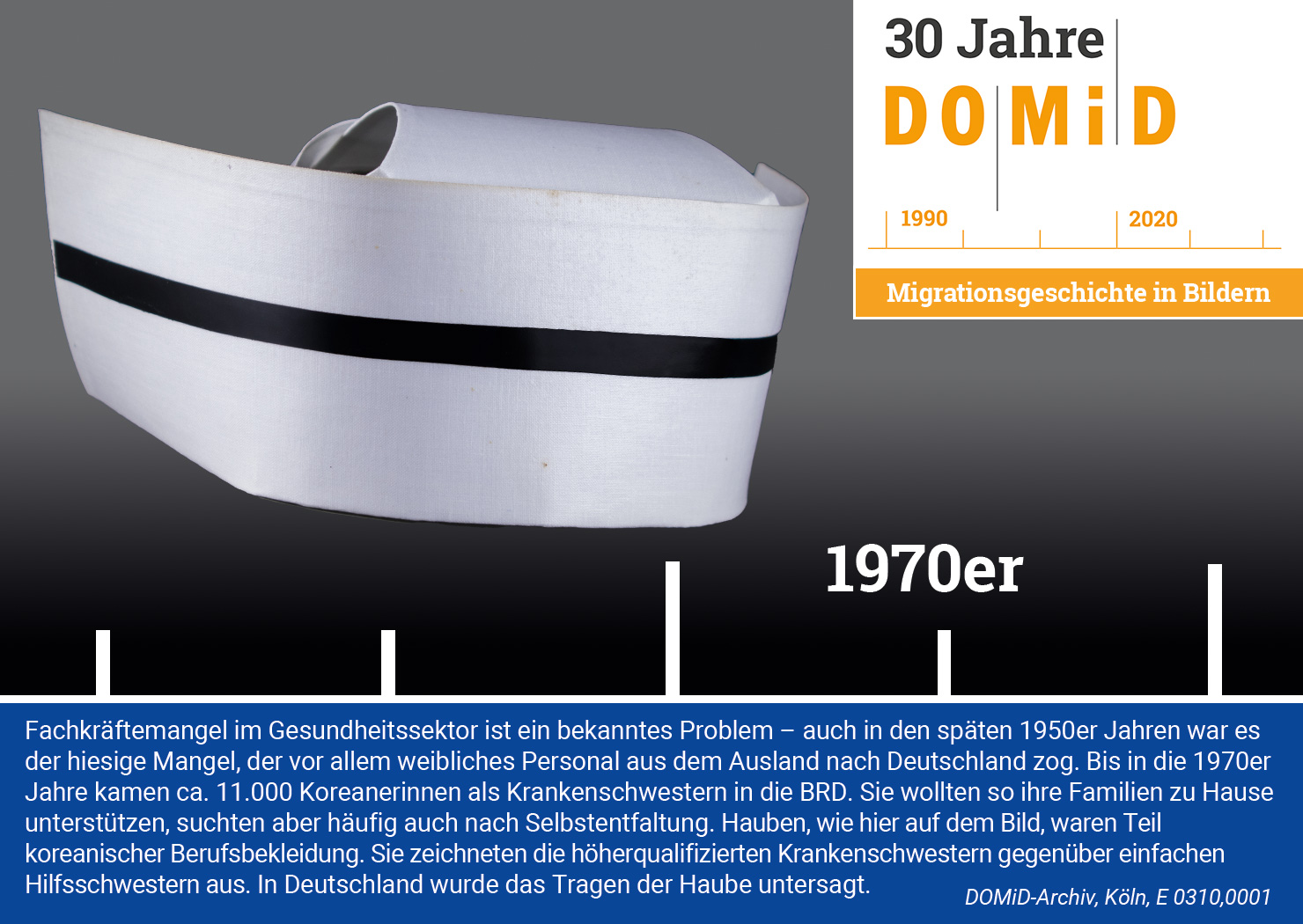