It has been 60 years since the recruitment agreement between the Federal Republic of Germany and Turkey was passed. To this day, such agreements continue to shape society and shape people: piece by piece.

60 years ago, many so-called guest workers set off for Germany at Istanbul's Sirkeci train station. Their feelings were characterized by sadness, ignorance, but also hope. The three-day train ride led to a foreign country - to Germany. The people were often not prepared. Their suitcases contained only the most essential items: photos of loved ones or even everyday objects that they could not leave behind.

The arrival in Germany was not easy. Most of the people did not know the language, the culture and the country. Society was foreign to them at first. But that was to change: Then called "guest workers," they are now citizens of this country.

What moments have shaped 60 years of Almanya? What do people with a family history or their own migration history think about the recruitment agreement? DOMiD has documented these and other questions as part of the project 60 Years of Almanya. Diverse insights can be gained on doeser page through interviews, picture galleries and event information.

Quotes on "60 Years of Almanya" 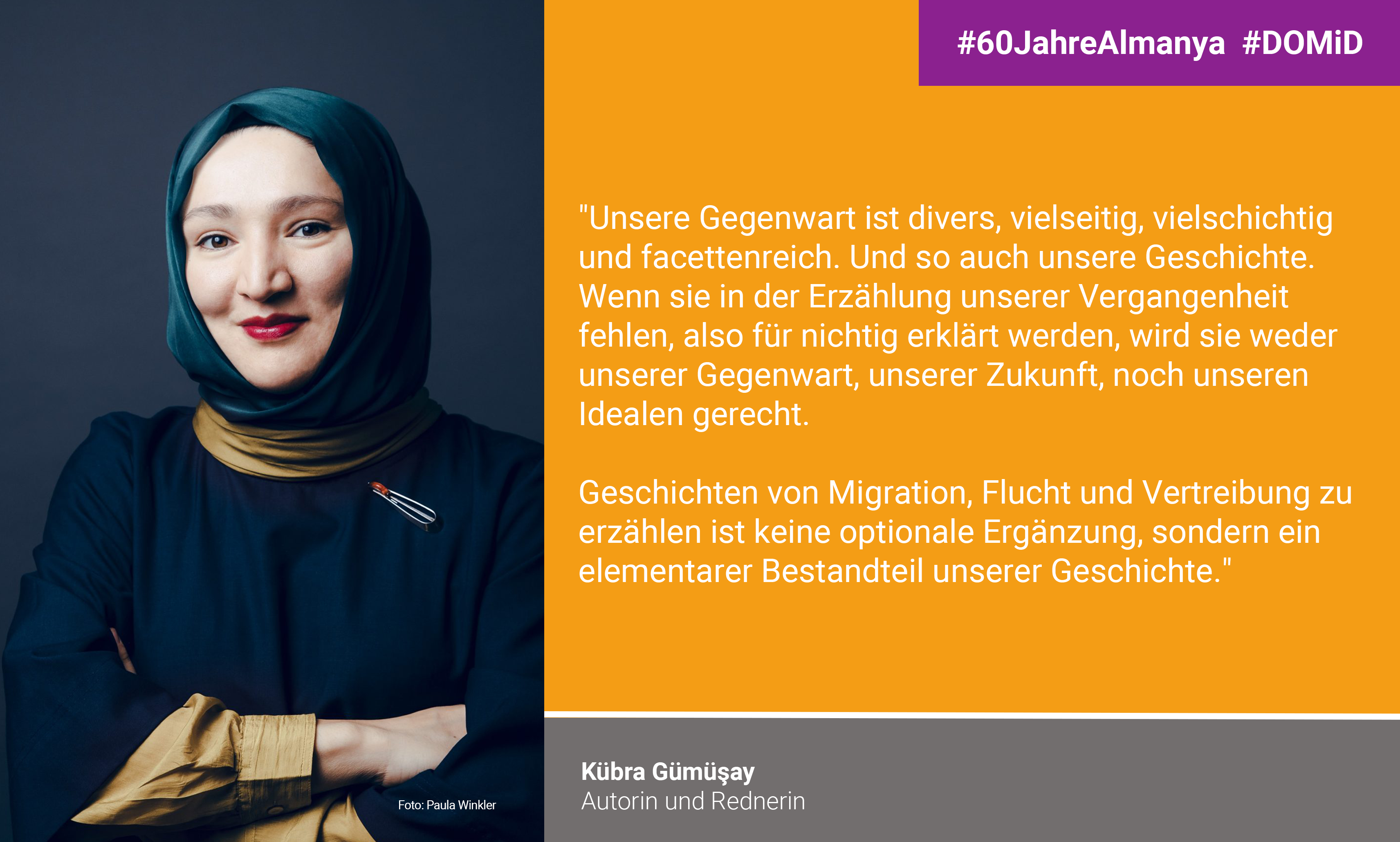 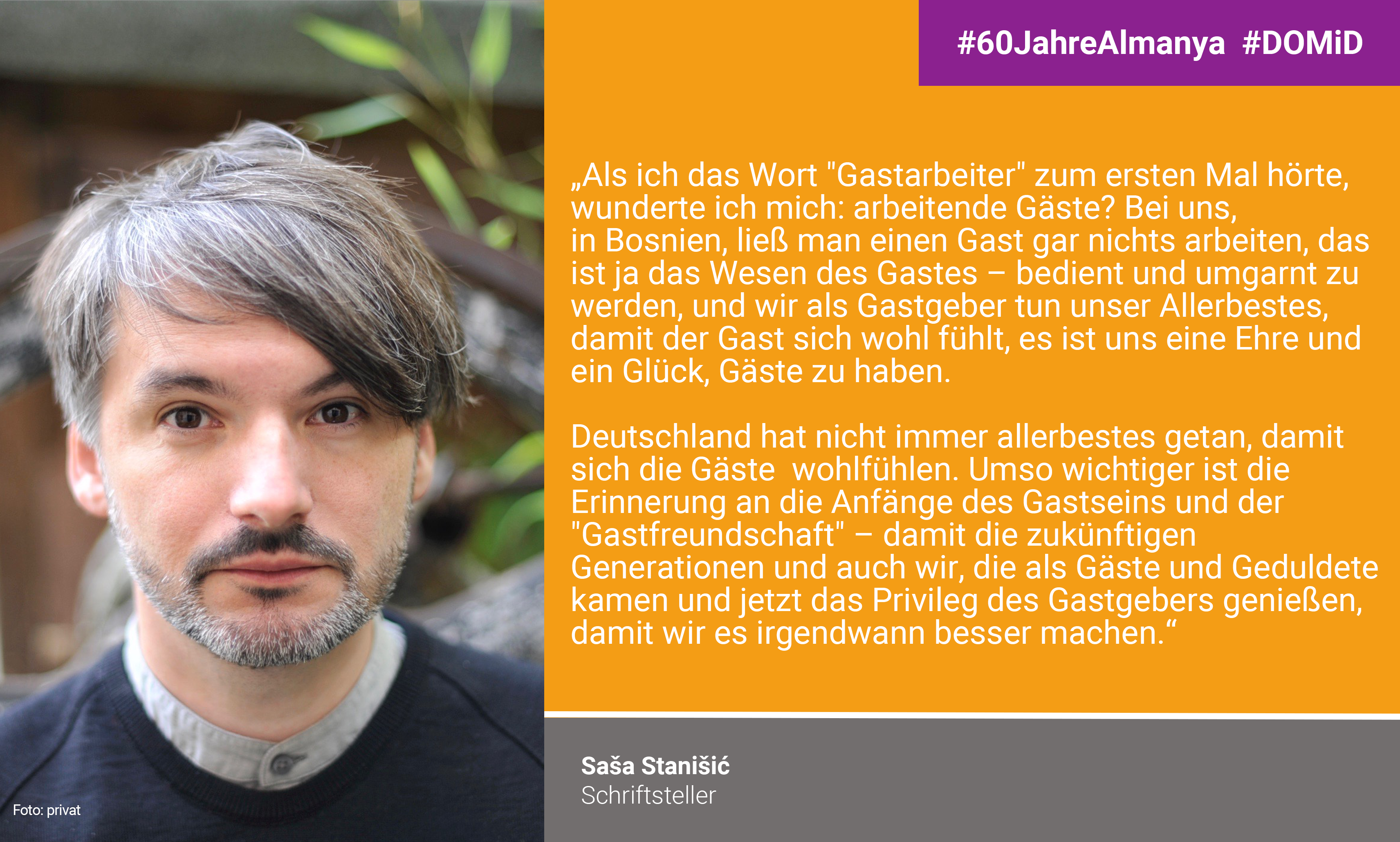 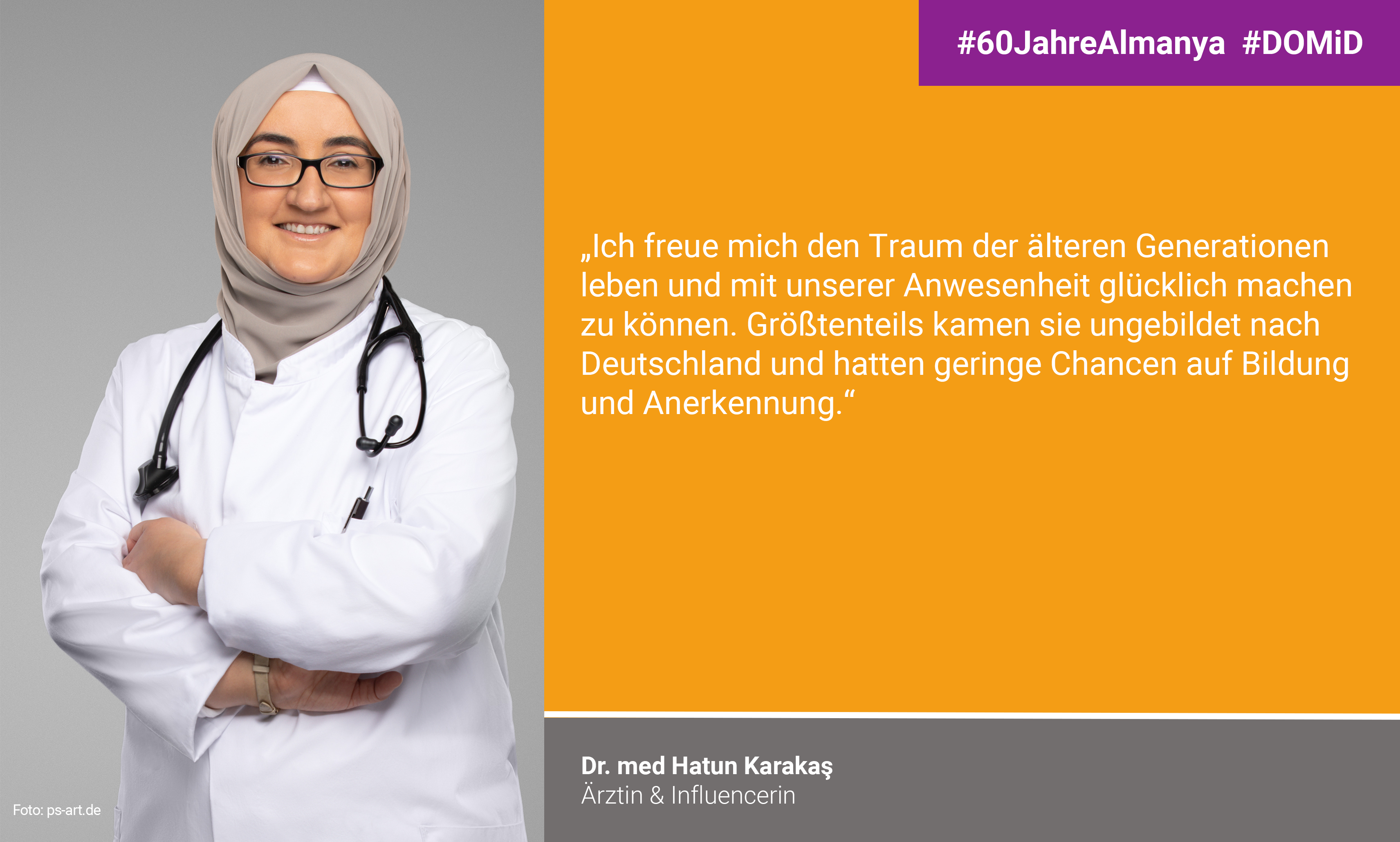 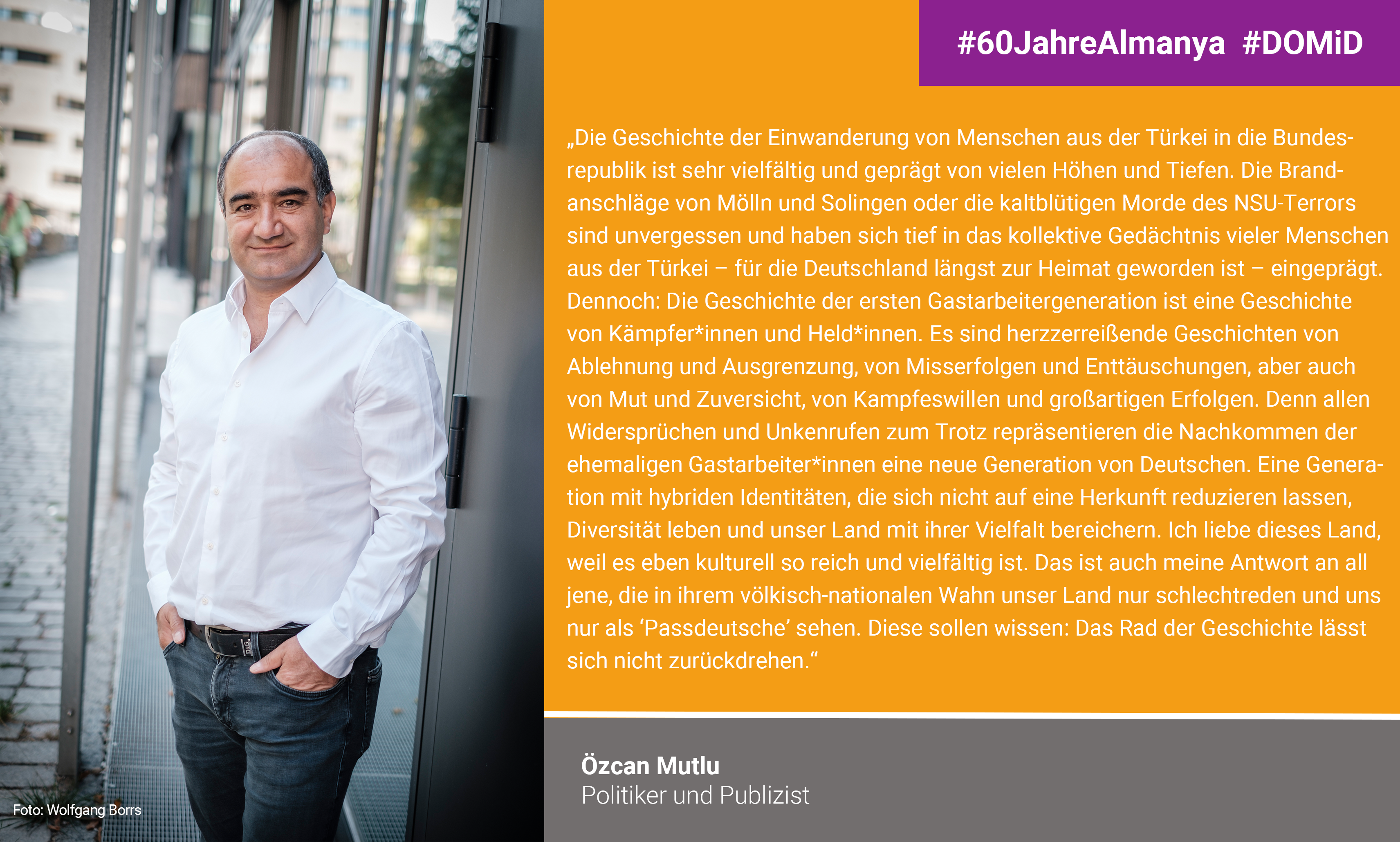 Kübra Gümüşay: "Our present is diverse, multifaceted, multi-layered and multifaceted. And so is our history. If it is missing from the narrative of our past, that is, if they are declared null and void, it will neither serve our present present, our future, nor our ideals. justice. Telling stories of migration, flight and displacement is not an optional addition, but an elementary elementary part of our history."

Saša Stanišić: "When I heard the word "guest worker" for the first time, I wondered: working guests? Here, in Bosnia, we didn't make guests work at all, that's the essence of a guest - to be served and embraced, and we as hosts do our very best to make the guest feel comfortable, it's an honor and a happiness for us to have guests. Germany has not always done its very best to make guests feel at home. That makes it all the more important to remember the beginnings of being a guest and "hospitality" - so that future generations and also we, who came as guests and tolerated and now enjoy the privilege of being a host, will do better someday."

Dr. Hatun Karakaş: "I look forward to the dream of the older generations and to make them happy with our presence with our presence. Most of them came to Germany uneducated Germany and had little chance for education and recognition."

Prof. Dr. Karim Fereidooni: "The memory of foreign workers who came to Germany as part of the recruitment agreement is relevant for our immigration society, because the prosperity of our society was largely created by these people. Without the great achievements of migrant workers, the economic miracle would have been inconceivable. Our society owes these people a great debt of gratitude."

Özcan Mutlu: "The history of immigration of people from Turkey to the Federal Republic is very diverse and marked by many ups and downs. The arson attacks in Mölln and Solingen or the cold-blooded murders of the NSU terror are unforgotten and have deeply imprinted themselves in the collective memory of many people from Turkey - for whom Germany has long since become their home. Nevertheless, the story of the first generation of guest workers is a story of fighters and heroes. They are heartbreaking stories of rejection and exclusion, of failures and disappointments, but also of courage and confidence, of the will to fight and of great successes. For despite all the contradictions and prophecies of doom, the descendants of the former guest workers represent a new generation of Germans. A generation with hybrid identities that cannot be reduced to one origin, that live diversity and enrich our country with their diversity. I love this country because it is so culturally rich and diverse. That is also my answer to all those who, in their völkisch-national delusion, only badmouth our country and see us only as 'passport Germans'. They should know: The wheel of history cannot be turned back." 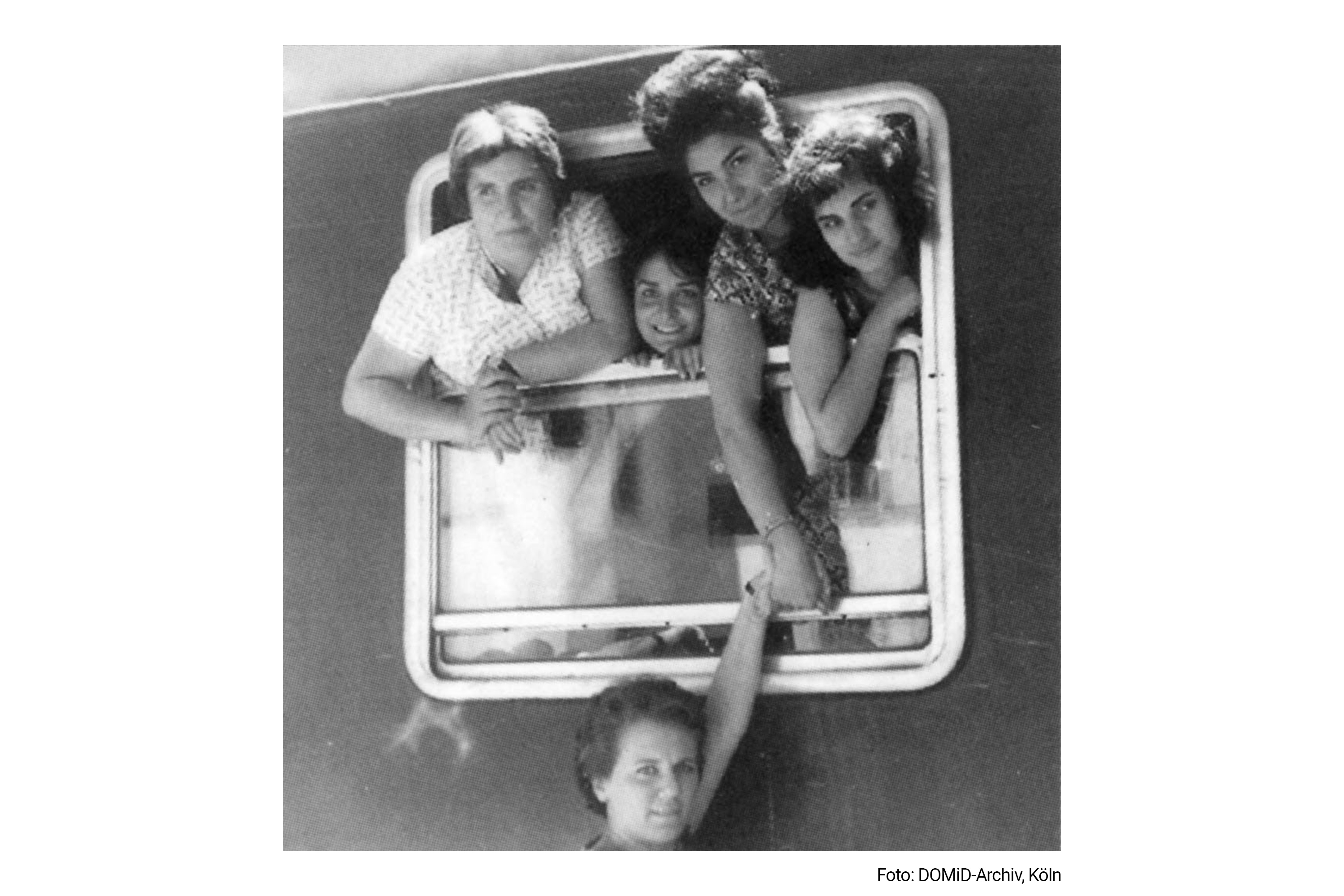 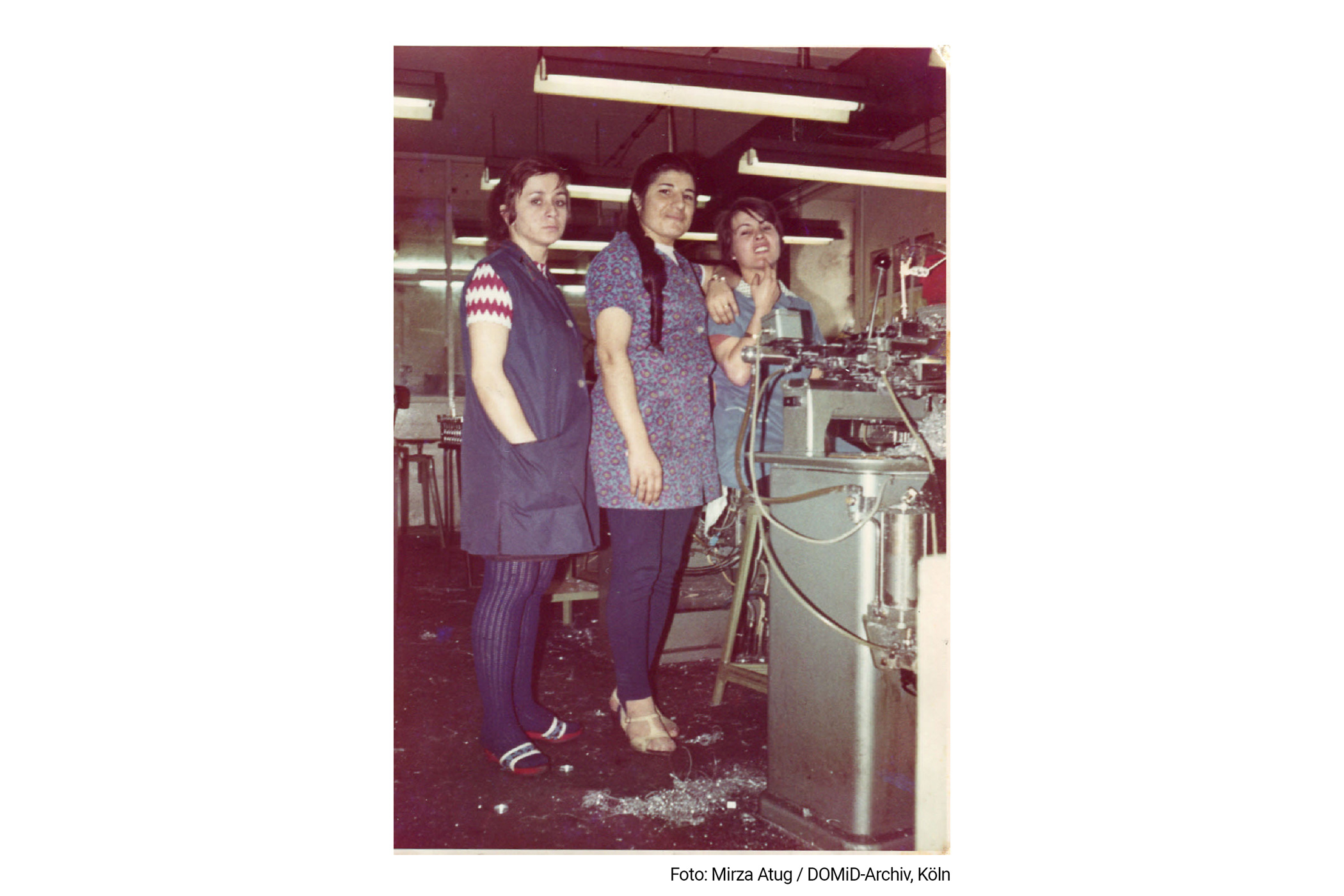 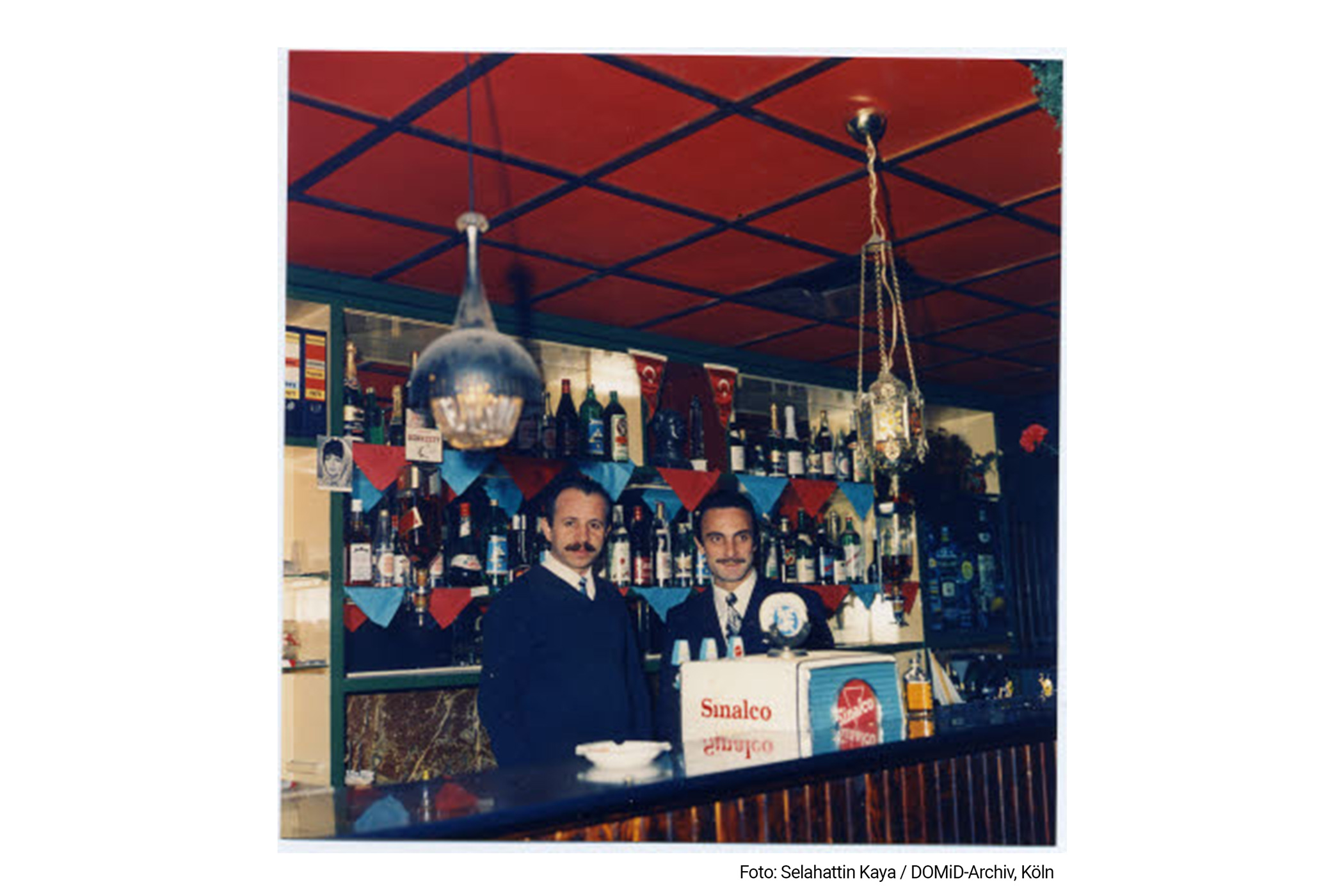 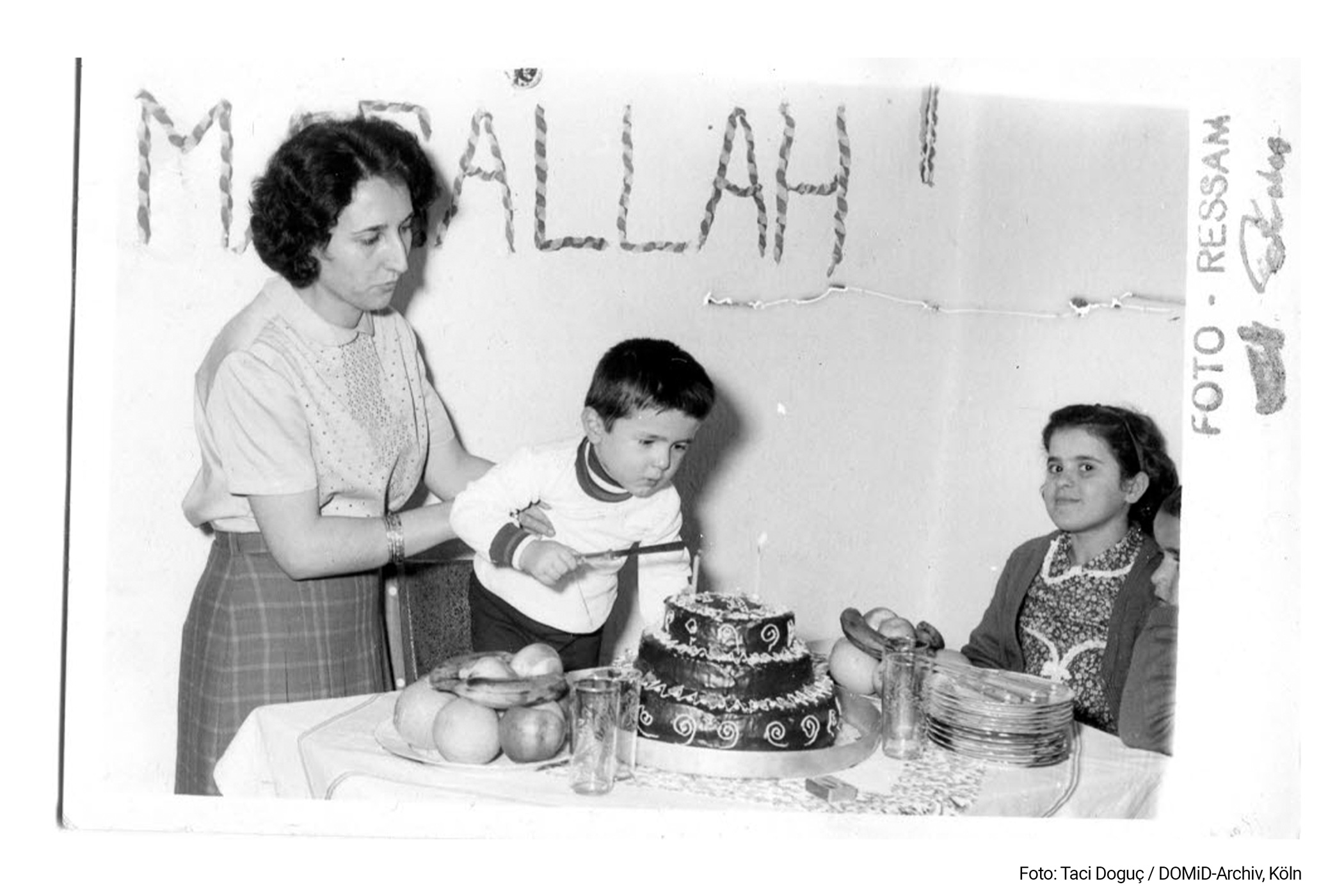 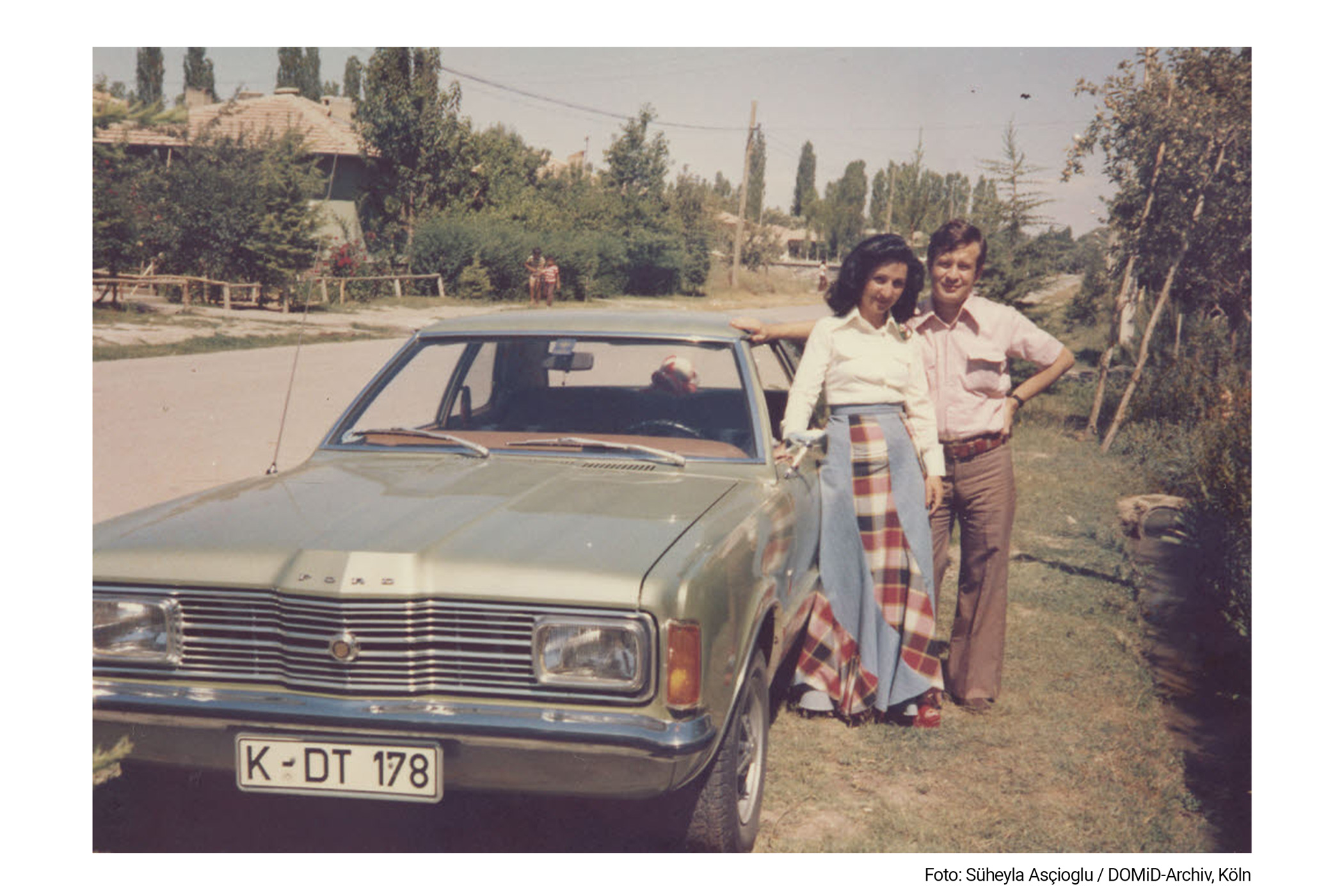 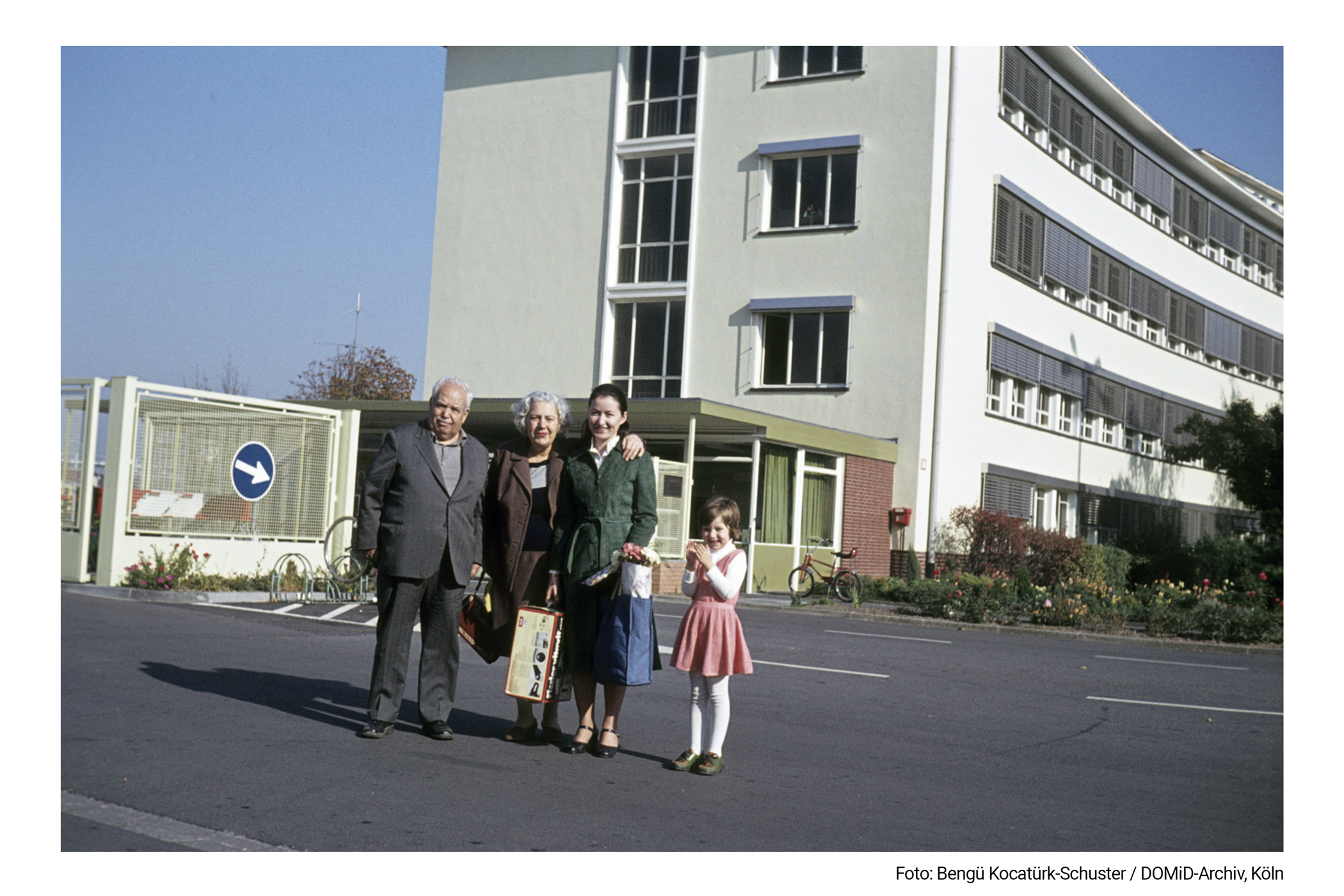 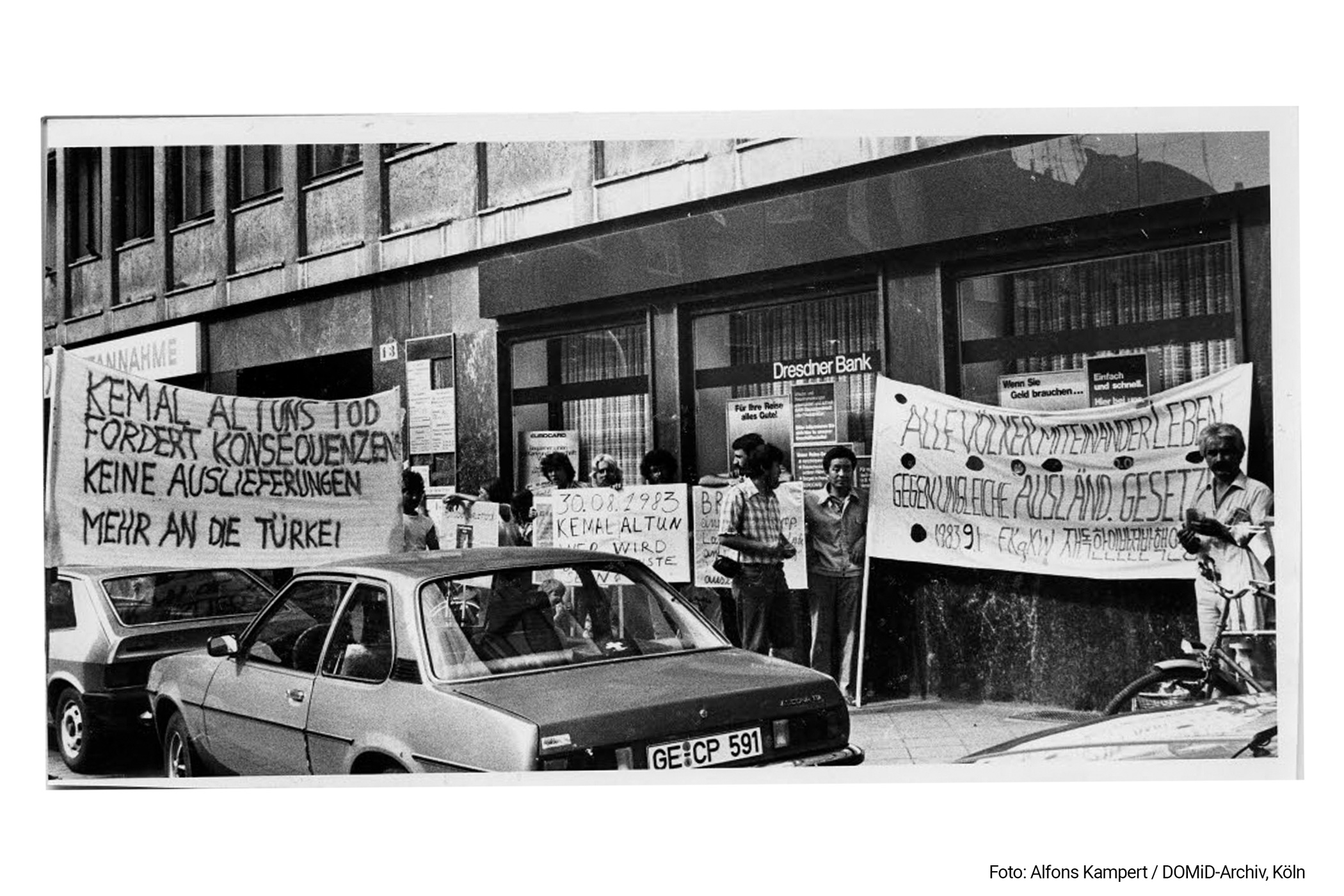 The so-called guest workers were mostly employed in the industrial sector. They were often employed in "gender-specific" jobs, like these women at the Paul Oubrier company, a button manufacturer. The worker in the middle came to Germany alone in 1968 and lived in a women's hostel in Gummersbach.

In 1968, the first Turkish restaurant called "Efes" opened in Berlin. The main focus here was on events with live Turkish music. By opening their own business, some migrants ventured out of the employment relationship and into self-employment at an early stage. Restaurants like these offered migrants in particular a space to meet and exchange ideas with acquaintances.

Shortly after the celebration of their son's second birthday in Turkey in 1970, the family joined the father, who had already been working in Germany for a year. Within the framework of family reunification, it became possible for very many foreign workers* to live together in Germany after a long period of separation.

Before the so-called guest workers were even assigned to work in Germany, they first had to pass an aptitude test. The men shown here tensely await the result of their examination at the German Liaison Office in Istanbul in 1973. The preceding examinations were associated with great pressure; after all, the result decided the next years of their lives and whether they would remain in Turkey or migrate to Germany.

This photo was taken in 1975 and shows a couple on vacation near Konya in Turkey. The Ford with Cologne license plates shows that they arrived by car from Germany. Many migrants from Turkey went to visit their relatives during the summer months. They often stayed for several weeks at a time, as this was the only time of the year when they could travel and see their families.

A family picks up the girl's mother after her workday at Philips in Krefeld Linn. The grandparents, with whom the granddaughter lived for many years, had arrived from Turkey shortly before. This picture illustrates the fate of the "suitcase children" who commuted between Germany and Turkey because of their parents' jobs.

In a cinema in Cologne's Weidengasse, a Turkish and an Italian film are shown. The presence of so-called guest workers in Germany naturally also opened up new markets for goods that specifically targeted migrants as consumers.

However, the lives of migrants in Germany have always been associated with great suffering. A sad example of this is the death of Cemal Kemal Altun: He applied for asylum in Germany as a political refugee because he was being persecuted by the Turkish military dictatorship due to his political activities in his home country. His extradition would have meant torture and certain death for him. To escape this fate, he jumped out of the window of the Higher Administrative Court in Berlin on August 29, 1983 and committed suicide. His death elicited expressions of grief and solidarity from the citizenry. This photo shows a vigil held in Gelsenkirchen that same year. Translated with www.DeepL.com/Translator (free version) 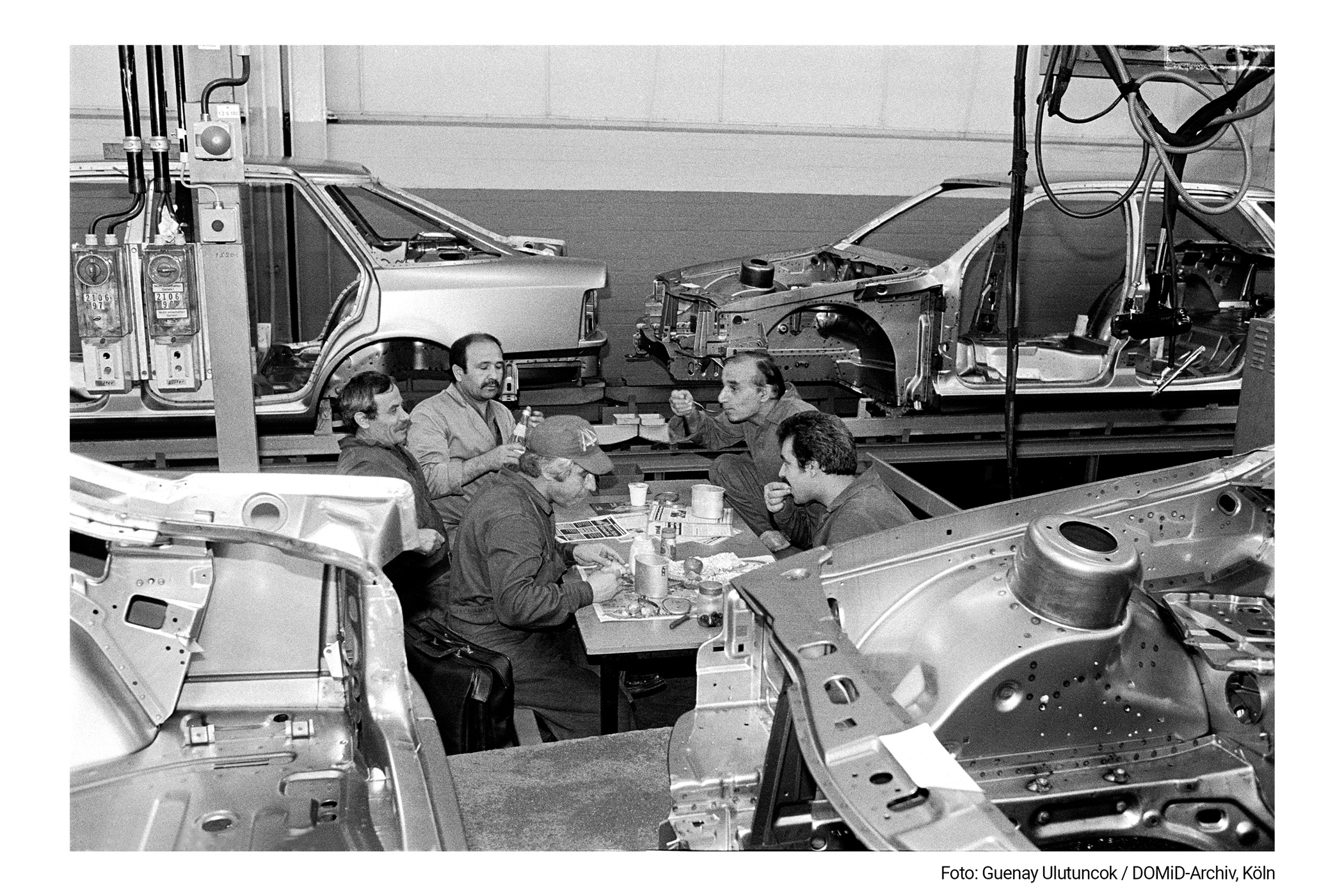 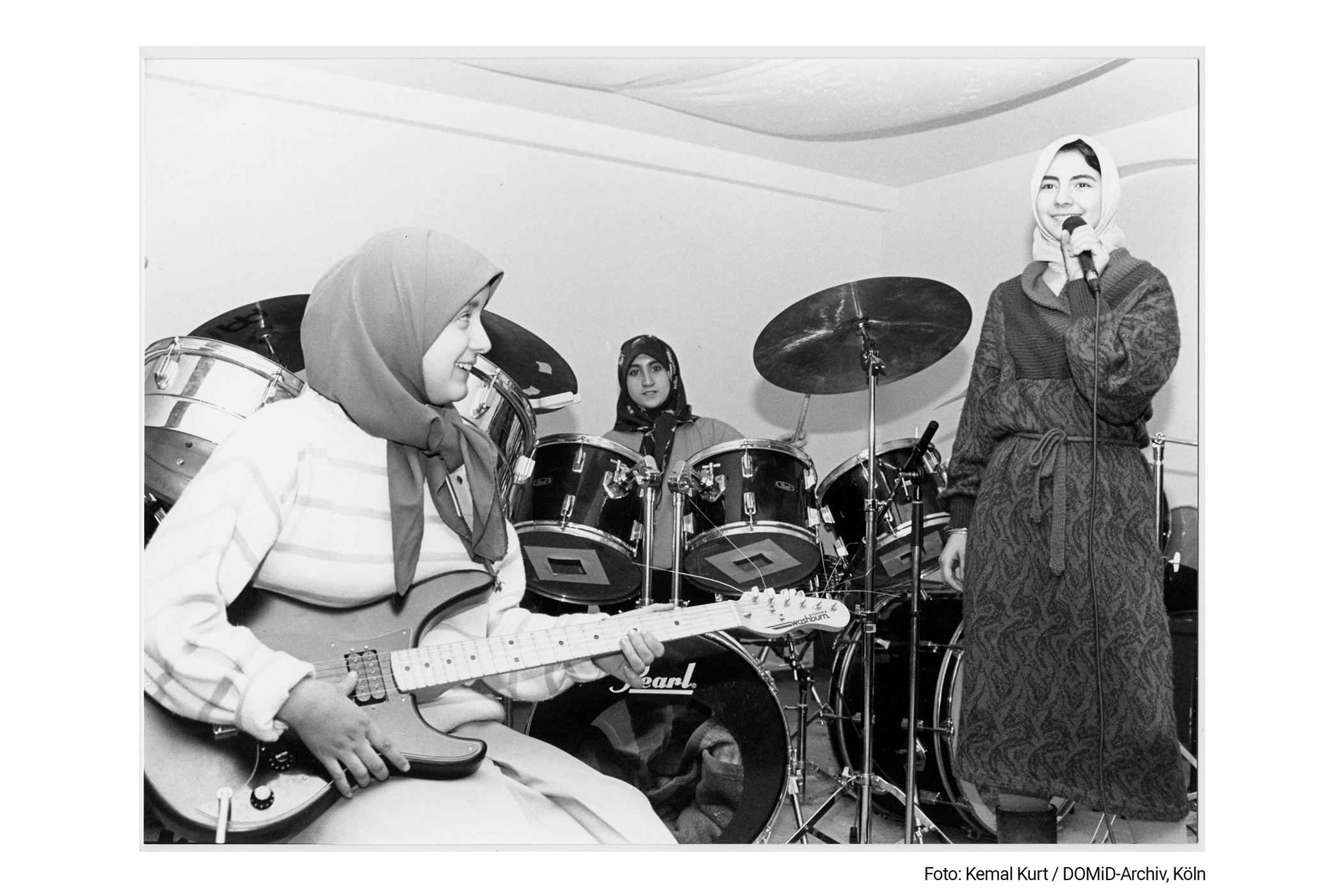 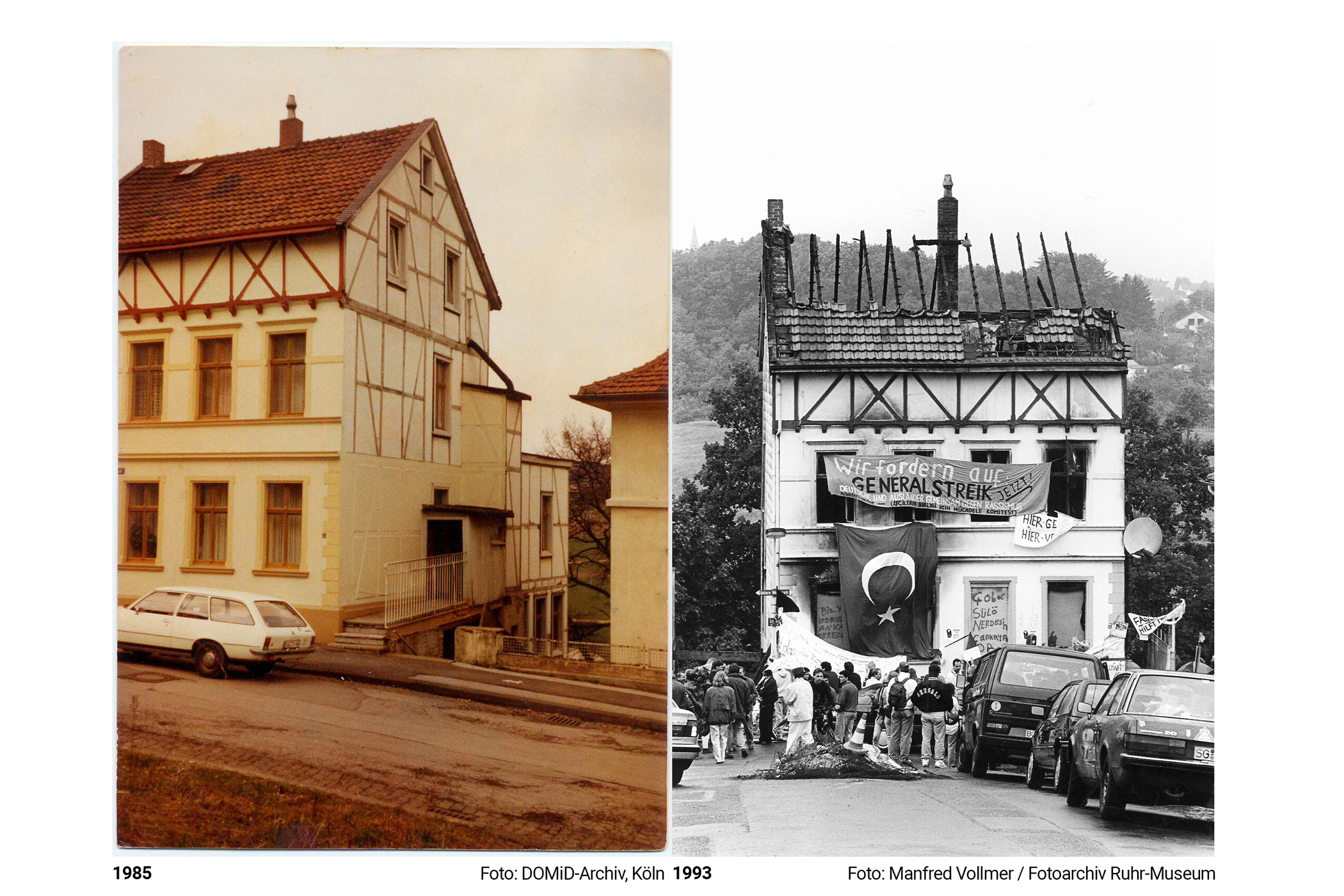 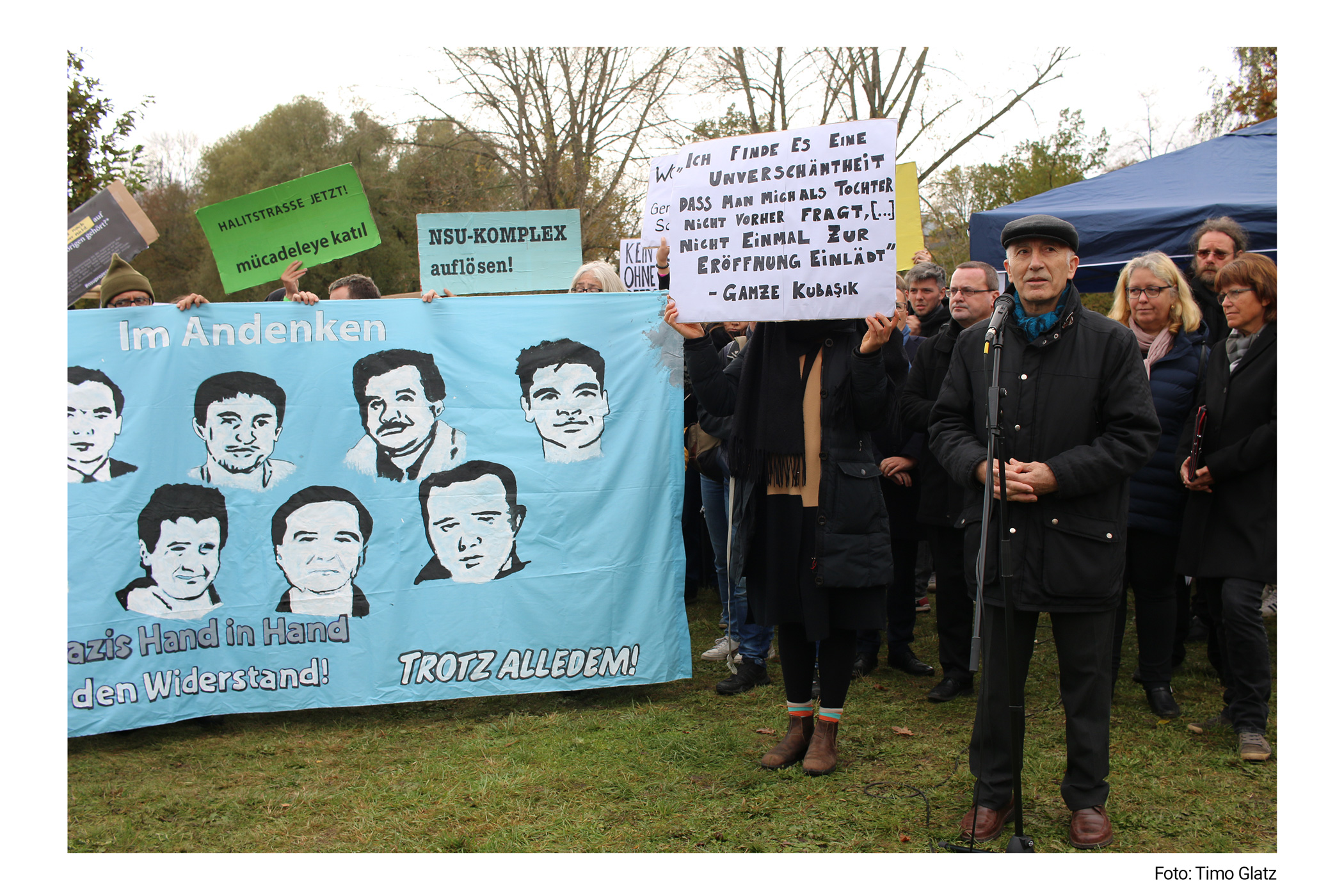 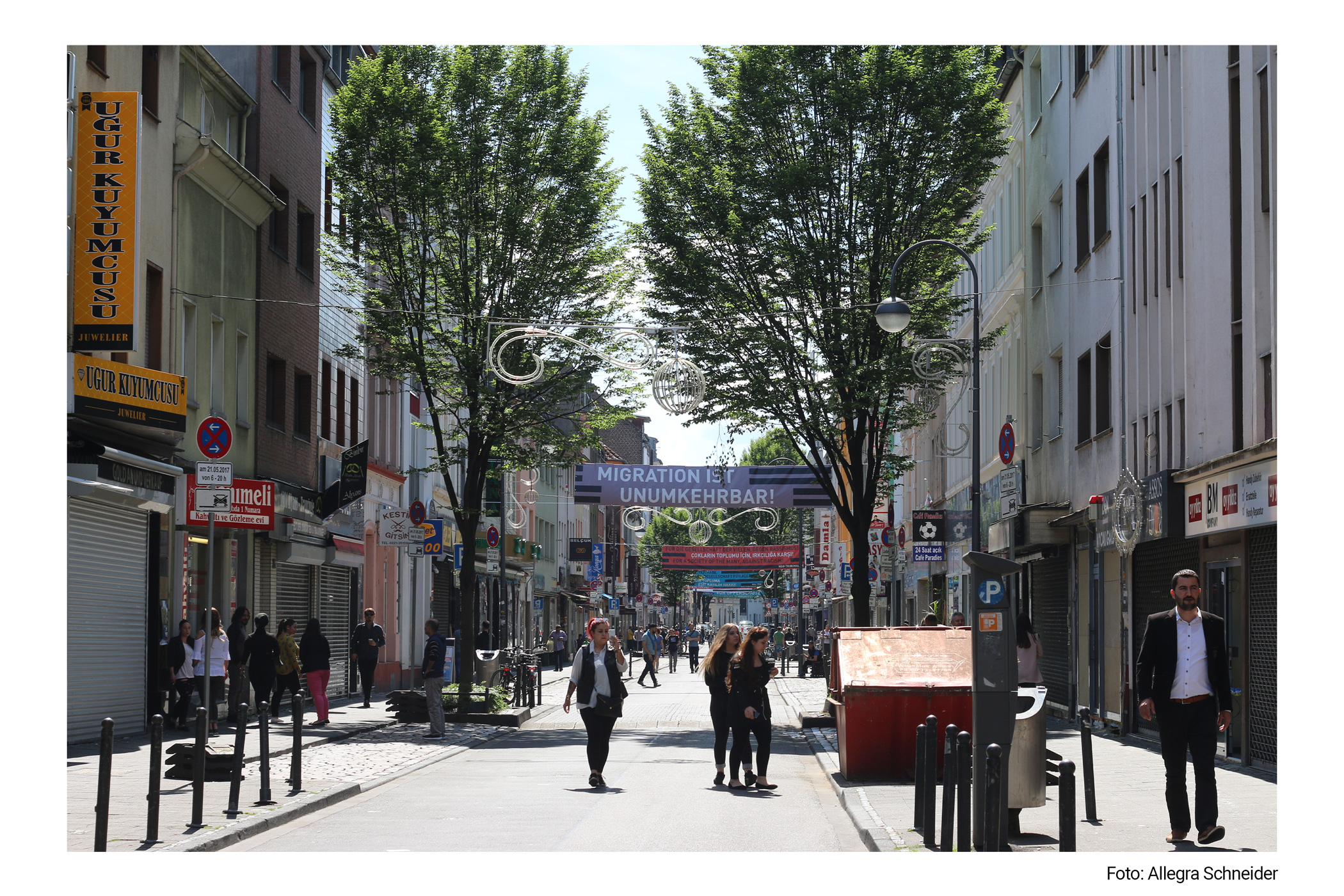 Workers at the Ford plants in Cologne Niehl during a break. So-called. Gastarbeiter (guest workers) did mostly heavy physical work that few German nationals were willing to do. As a result, many foreign workers still have severe physical complaints today. However, the workplace was often also a meeting place: here, employees of different origins worked together and got to know each other.

A music group of young Turkish women plays in Berlin in 1987.

The German family H. and the Turkish family G. knew each other from their common workplace, the car manufacturer Ford. This photo shows them on vacation together in Turkey in 1988. The picture was possibly taken during a break from the car trips that often lasted for days. Installing roof racks on vehicles offered a practical way to accommodate more luggage for the sometimes week-long vacations in the migrants' home countries.

One day after the opening of the Berlin Wall, people gather at the former border between West and East Berlin at Gröbenufer (today May-Ayim-Ufer) and Oberbaumbrücke in Kreuzberg. At the time, Kreuzberg, which was dominated by migrants - especially Turks - was considered a forgotten district on the outskirts of West Berlin. Here, the Spree acted as a water border between the two parts of the city until 1989. The Gröbenufer is a particularly sad reminder of these circumstances: five children drowned on the unpaved bank between 1966 and 1975. (Source: Chronicle of the Wall, Fatalities)

On May 29, 1993, members of a family with a Turkish migration history were murdered in a racist arson attack in Solingen. The relatives were Genç Gürsün Ince (27), Hatice Genç (18), Gülüstan Öztürk (12), Hülya Genç (9) and Saime Genç (4). 14 other family members had injuries, some of them life-threatening. Mevlüde and Durmus Genç lost their daughters, granddaughters and niece in the arson attack. Both immigrated to Germany from Turkey in the early 1970s with three children. The arson attack was committed for base, racist motives. The racist arson attack in Solingen was the culmination of right-wing extremist violence in the years following reunification. Since then, Mevlüde Genç has campaigned for tolerance and understanding and thus contributed to peaceful coexistence in our society. The pictures illustrate the house of the Genç family before and after the arson attack.

In memory of the ten known murder victims - among them several victims from Turkey - of the "National Socialist Underground" (NSU), the city of Zwickau planted trees in a public park. When unknown persons desecrated the memorial tree for Enver Şimşek, trees were planted again in November 2019 as part of a memorial event. However, those affected and their families were not invited or were invited late and were not involved in the preparations in advance, which was criticized by Gamze Kubaşık (daughter of murder victim Mehmet Kubaşık from Dortmund), among others. Activists of the tribunal "NSU-Komplex auflösen", which met in Zwickau and Chemnitz at the same time, criticized this invitation policy with signs and demanded that victims of racism be made the focus of remembrance and be involved. These signs are archived at DOMiD.

Keupstraße is a lively German street in Cologne-Mülheim, known as a center of business life of people from Turkey. Kurds, Turks, Alevis, Roma, Germans but also Kurdish Alevis, German Turks and Turkish Germans and many more live and work in the street. The increasing deindustrialization of the neighboring Schanzenviertel, which had previously been a major employer, led to the long-established shopkeepers leaving their businesses from the 1970s onward. Migrants of Turkish origin (quite a few of whom had previously also been employed in the factories) settled there and revitalized the decaying street. The street is thus an example of how migration can shape urban spaces and how different individual lifestyles can turn an orphaned neighborhood into a thriving cultural and economic center.

Documentation on the history of DOMiD

Events in the framework of "60 years of Almanya